The coveted act's first true tour of the continent sees the two acts performing in Chicago, Detroit, Toronto, Montreal, Boston, New York, Philadelphia, Baltimore, Raleigh, and Atlanta from October 10th through 19th, as previously announced, after which they are now confirmed to cross the US for additional dates. The newly announced West Coast dates now see the tour hitting Austin, Mesa, San Diego, Berkeley, Portland, and Seattle from October 21st through 27th. ORANSSI PAZUZU will see the band joined by Insect Ark who will provide support for all dates.

The new tour dates come with a message directly from the members of ORANSSI PAZUZU, having been unable to perform at their ‘Psycho Las Vegas’ and additional Los Angeles shows, due to circumstances completely out of the band's control: “The visa process is now under control with the help of our US agent and the same attorney who successfully arranged the visas for ‘Maryland Deathfest’ a few years ago, who has worked all through the weekend to deliver a phone-book-sized amount of data to US immigration. Through premium processing, we are feeling very confident about the visa and the tour”. 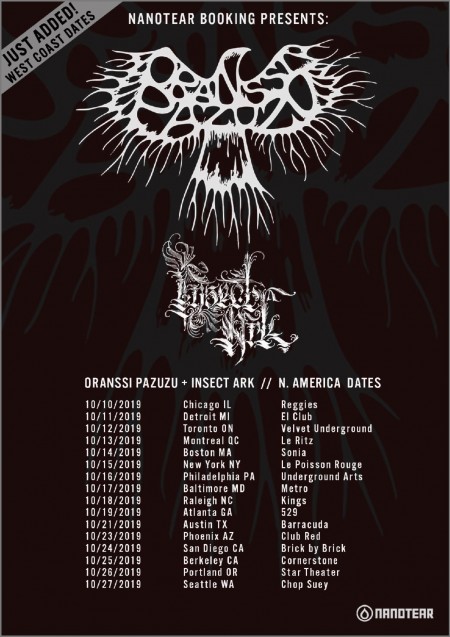