Portland, Oregon's NIGHTFELL - the creation of Todd Burdette (TRAGEDY, HIS HERO IS GONE, WARCRY) and Tim Call (MOURNFUL CONGREGATION, SEMPITERNAL DUSK, WEREGOAT) - is preparing to issue their monolithic third album, “A Sanity Deranged”. With the record a month from release through 20 Buck Spin, the lead track “No Life Leaves Here” is now streaming. Check it out below.

Recorded and mixed together with Greg Wilkinson at Earhammer Studios (HIGH ON FIRE, ASUNDER, VASTUM, ULTHAR) with additional instrumentation and vocals tracked by Billy Anderson (NEUROSIS, MELVINS), and mastered by Brad Boatright at Audiosiege (SUNN O))), MOURNFUL CONGREGATION, NOISEM), NIGHTFELL evokes their most dense and dynamic recording yet with A Sanity Deranged.  A sharpened blade of iron and steel forged in the fires of tumult, the album is the annihilating vanguard for the end times now upon us all.

In the studio, all NIGHTFELL music is written and performed by Todd Burdette and Tim Call, while the live lineup is comprised of Burdette on guitar and vocals and Call on drums, with guitarist Vince Blank and bassist Derek Willman. The band has a hometown show with BELL WITCH and others on August 31st, with a run of West Coast dates to be announced for November. Stand by for additional NIGHTFELL shows to post.

“A Sanity Deranged” is a pinnacle to this point of the disparate sounds that shape the cohesive discordance of NIGHTFELL. Slicing ice cold texture cuts like obsidian glass amidst the monumental death crush and grim wallow of doomed dejection. The heart has remained as defiant and vigilant as ever, but the old flesh has been shed and a beast reborn rears forth - jaws dripping, teeth gnashing, shedding the withered exoskeleton for an adherent body. 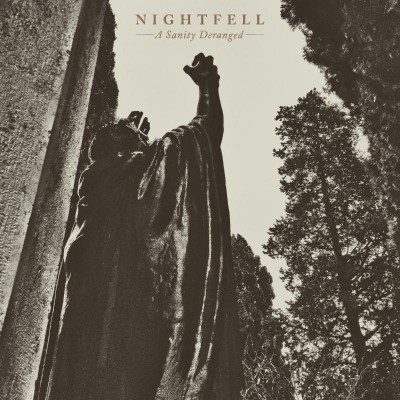