Formed by former ENTOMBED members LG Petrov (vocals), Victor Brandt (bass), Nico Elgstrand (guitar) and Olle Dahlstedt (drums), this marauding band of death metal warriors have steadily established their own identity over the last five years. Debut album “Back To The Front” was a raw and raucous revelation that delighted fans old and new. Two years later, the monstrous “Dead Dawn” emerged, building on the debut's furious power and confirming ENTOMBED A.D. as major players in today's world of brutality. Fast forward to 2019 and the third chapter in the band's savage saga is ready to be unleashed.

“We released “Back To The Front” and that was a great album”, says LG Petrov. “Then we made “Dead Dawn” and now we've come to the point where we've sound our comfort zone, we've found our own sound, and we're just taking time to sort everything out and get it right. Now we have a great sound and a good foundation for the future. Everything feels really good right now. The new album is called “Bowels Of Earth” it's Death Metal - simple and straightforward!”

The first Entombed A.D. created by the band's current line-up, which also features long-time live guitarist Guilherme Miranda, Bowels Of Earth represents a huge leap forward for these gnarly veterans. Faster, tighter and more viscerally crushing than anything they have produced before, the brutish, pummeling likes of first single “Fit For A King” and raging album opener “Torment Remains” offer zero compromise and several tons of exhilarating brute force and lacerating hooks.

“We have our Brazilian friend, Guilherme, coming into the band on guitar and”, laughs LG. "We've been getting energy from that. This recording was a lot more focused and straightforward. We kept things simple, but still with thought behind everything. And there was absolutely no stress! We recorded the drums in one studio and the rest was recorded in a little tiny place. I wouldn't even call it a studio, it was just recording devices and drums and amps, but it really worked. You don't have to go these big studios for three months anymore. So we spent four months in a little studio instead, ha ha ha!”

Although the songs on “Bowels Of Earth” will satisfy anyone that has enjoyed ENTOMBED A.D.'s music to date, they also offer thrilling glimpses of the band's future. From the unrelenting intensity of “Elimination” to the rumbling tank-swarm of the title track and the rampaging Sludgecore insanity of “Bourbon Nightmare”, ENTOMBED A.D. have both surpassed their past achievements and taken their old-meets-new-school attack to a new level of efficacy.

“We tried to focus a lot on the guitar sound, to make it new and exciting but still that old school, back-in-the-day, HM-2 distortion vibe. So it's back to the roots, but new flowers are arriving! Ha ha! But it's more death metal than anything else. People can call us whatever they like. Everybody has their own interpretation of music and lyrics and that's cool! We prefer to just call it music”.

Recorded with initial assistance from revered studio guru Jacob Helner (RAMMSTEIN) and thereafter overseen by Nico Elgstrand, “Bowels Of Earth” is instantly recognizable as the best sounding ENTOMBED A.D. release to date. Striking a sublime balance between gritty extremity and big, bold, contemporary sonic values, it's the sound of a great band becoming greater and loving every brutal, death-obsessed second of it. "We're doing a ton of festivals this year and we'll go on tour when the album comes out”, LG concludes. "We're working on it all right now. We'll get out there, tour and then we'll make another new album. It never ends! We all enjoy it a lot. When we meet up in the cab to the airport and have a few beers, we're a happy bunch of guys!” 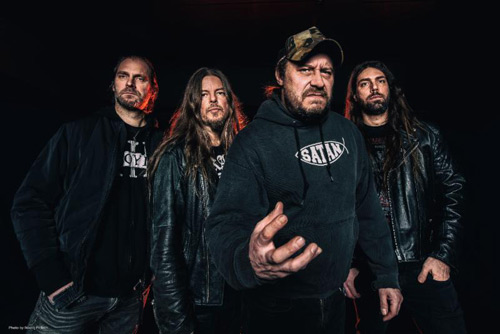