British Heavy Metal icons DIAMOND HEAD are pleased to unveil a lyric video for “The Sleeper”. The tune comes by way of the band's critically-lauded “The Coffin Train” full-length, released earlier this year via Silver Lining Music. Stream the video below.

Their fourth single, “The Sleeper” is epic, commencing with calm and sober vocals that build into a poignant and powerful riff and chorus that takes the listener on a dark, reflective journey. Of the track, vocalist Rasmus Bom Andersens comments, “It's such a big sounding track that it almost takes you on a cinematic journey. “The Sleeper” is a follow up to “Silence” off the last record. We had fans who loved the orchestral elements and I wanted to give them some more. It was inspired by a favorite Sci-fi movie from my childhood”.

Adds guitarist Brian Tatler, “Starting life in 2016 with the main riff, I decided to demo it and see if I could make it into a song. With a bit of work this grew into a powerful monster with Ras' lyrics inspired by the 1984 film “Dune”. It's very moody and dynamic with brilliant orchestration”.

Following an electrifying performance at ‘Wacken Open Air’, DIAMOND HEAD are relentless in their quest to bring “The Coffin Train” to stages around the globe. The band will tour through Europe for the rest of 2019 and are confirmed on the lineup of two very special UK shows with NWOBHM giants, SAXON, which will take place on October 19th at the legendary Hammersmith in London and October 20th at the O2 Apollo in Manchester. The band will also support BLACK STAR RIDERS as well as URIAH HEEP on select dates. See all confirmed dates below. 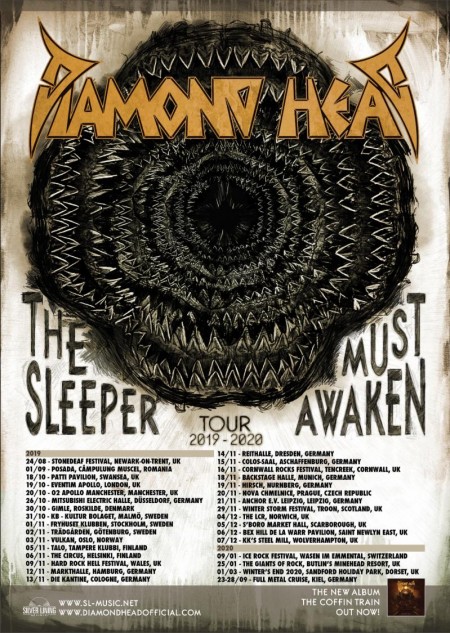