“Ready for another round of ‘Wacken’ madness? Still grinning wildly thinking about our 30th anniversary edition? Well, we are looking forward to next year's festival as much as all of you metalheads out there. ‘Wacken Open Air 2020’ is already shaping up nicely with the first batch of amazing bands confirmed – and a cool brand new look on top. Get ready to dive into Maya and Aztec culture in ‘Wacken’ next year!

First things first – and music always comes first in ‘Wacken’. We are proud to announce the following bands for 2020:

One of the highlights of next year's ‘Wacken Open Air’ will definitely be... the mighty JUDAS PRIEST! True legends celebrating "50 Heavy Metal Years" at the Holy Ground – a match made in headbanging heaven! JUDAS PRIEST have shaped Heavy Metal as we know it and we are incredibly honoured to welcome them to the festival for the fourth time.

Vikings and Metal go well together as we all know. There is no band out there that brings the fire, the screaming, and the general kickass awesomeness of both worlds better together than AMON AMARTH. These Swedes keep getting stronger and have been part of the ‘Wacken’ journey since 1999! Next year, they will bring out the “Beserker” in all of us for an impressive ninth time at the ‘Wacken Open Air’.

MERCYFUL FATE rank among the true classics in metal history, setting the bar pretty high in terms of riffing madness and delightfully evil vibes. Is there anyone that sounds even close to King Diamond's truly and utterly unique voice? We don't think so. The band will grace next year's festival with one of their rare appearances.

The world of melodic Death Metal would sound very, very different without AT THE GATES. These guys from Gothenburg, Sweden more or less invented the genre, especially with their seminal album “Slaughter Of The Soul” from 1995 – which they will bring to ‘Wacken’ in its entirety!

"Ladies and gentlemen from the very depths of hell, please welcome": VENOM! The instigators of Black Metal with legendary frontman Cronos will invade ‘Wacken’ and we guarantee that it will be one hell of a gig!

More high-class brutality will be delivered by Death Metal legends HYPOCRISY from Sweden who already participated at the ‘Wacken Open Air’ for the first time in 1998. We kind of missed these guys a lot, so we are ready for another onslaught in 2020.

If you have been paying attention to extreme music and Thrash Metal, you will know SODOM. They have been a part of the first wave of Thrash from the start, blasting out a stone cold classic with “Agent Orange” in 1989. And guess what? After the recent return of guitarist Frank Blackfire, they will perform a special “Agent Orange” show in ‘Wacken’.

While we are on the subject of Thrash Metal: This kind of friendly violent fun would be decidedly less enjoyable without the Bay Area. One of the first bands to emerge from the second wave of thrash from California are DEATH ANGEL. They went on a hiatus for a while, but since 2001 these guys just don't stop. You'll see them riff away on one of the ‘Wacken’ stages in 2020!

Straight to the point and energy levels in the red: That's is SICK OF IT ALL! For this reason, we invited them to the festival next year, which their second stint here. Make them feel welcome again and get into the pit!

You want heavy metal, bang your head, and to sing along? We have got just the right band for you: BEAST IN BLACK from Finland are on the bill for 2020 as first timers.

Can you handle even more of the good thrashy stuff? NERVOSA from Brazil are confirmed!

Last but not least there are CEMICAN, who are being featured in the new trailer and appeared on stage during the band announcement at the festival. The band from Mexico combines historic instruments and metal, which fits perfectly to the new theme of the festival.

‘Wacken Open Air 2020’ comes with a theme that will run through the whole festival: Maya and Aztec culture! The theme is not just about a look... there will special food, related shows, sights, and sounds. All of this will happen on the Holy Ground of ‘Wacken’ as part of the celebration of Heavy Metal music. Get ready for a surprise." 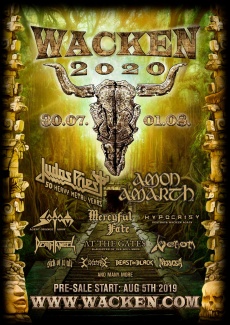