Bay Area melodic Death Metal outfit LIGHT THIS CITY embarks on their short tour through the Southwest US today, continuing to tour in support of their acclaimed “Terminal Bloom” LP, released last year through Creator-Destructor Records.

After several tours throughout the US and Canada, as well as their first tour of Mexico, and a recent tour of Japan, LIGHT THIS CITY now takes off through the Southwest US. The seven-date tour runs from July 30st through August 05th. Following a one-off in Fresno, after which the band will meet up with Redwood City-based symphonic Death Metal outfit CREPUSCLE, who will provide support for the next six dates -- Phoenix, El Paso, San Antonio, Corpus Christi, Austin, and Houston - advancing their impending album through Creator-Destructor.

September sees LIGHT THIS CITY making their long-awaited first tour of Europe. The band's European ‘Bloom Part 1’ trek will begin September 12th and run through Germany, Denmark, Holland, Austria, Italy, and Switzerland, coming to an end on September 21st. Watch for additional tour dates to be announced in the months ahead as the band continues to book new ventures.

“Terminal Bloom”, LIGHT THIS CITY's first album in a decade, boasts ten tracks that capture their tendency towards extreme melody and intensity, honoring the Swedish sounds of the '90s. Having spent the past decade performing and touring in numerous other bands, the five members of LIGHT THIS CITY have only honed and shaped their skills and musicianship since their 2008-released “Stormchaser”. “Terminal Bloom” was recorded from December 2017 through February 2018 with Zack Ohren (SUFFOCATION, CATTLE DECAPITATION, FALLUJAH) at Castle Ultimate Studios in Oakland, California, as with their previous four albums, and is wrapped in the vibrant cover artwork of Tony Midi.

“Terminal Bloom” is available on CD, LP, and digital formats now through Creator-Destructor Records. Find order options at the label webstore HERE and Bandcamp where the album is streaming HERE. 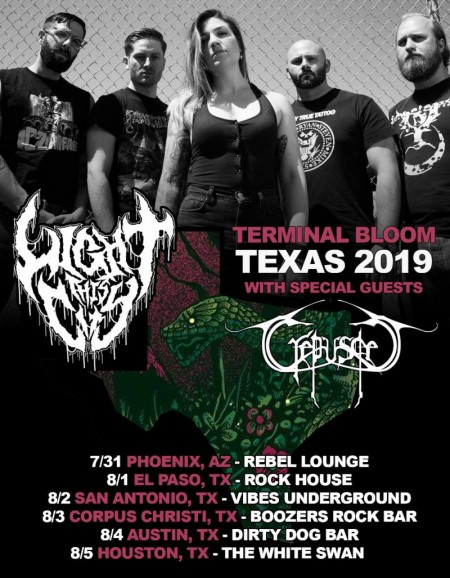