We all wade through archetypes. We all ARE archetypes. Distant echoes of a life both primeval and noble. To embrace these archetypes, to accept them not only as a part of life but as life itself is what some may call enlightenment, some peace of mind. ELUVEITIE call it Ategnatos. And by using their longest gap between two metal albums to gather momentum, they just forged their strongest album around it. The new album, "Ategnatos", will be released on April 5th via Nuclear Blast.

The band states: ""Ategnatos" probably became our most organic album by all accounts. It is the result of a thoroughly intuitive process, where we gave creativity full scope. And during this process quite some back-to-the-roots developments emerged in diverse aspects. Many riffs off "Ategnatos" reminds on the guitar work on "Slania". Following our gut feeling we brought the mixing duties back to Jens Bogren's Fascination Street Studios, where our Nuclear Blast debut was produced. And regarding the album artwork it soon became very clear to us, that we'd love to work with the fabulous Travis Smith again, who already created the front covers of our albums "Spirit" (14 years ago!) and "Everything Remains As It Never Was". And we're honestly excited with the result! The frontcover shows a spectacular scenery in central Switzerland, a so-called 'vulva cave', as it was sought to mark sacred rites of fertility and celebrations of life in ancient times! The artwork mystically and beautifully expresses the "Ategnatos" very core and essence! Once again it was a pleasure to work with Travis!"

Recordings of "Ategnatos" took place in their beloved New Sound Studio with their engineer of choice Tommy Vetterli. "Yet it was radically different as we only had four weeks to record this time around - as compared to the eight weeks we had for "Origins".” By taking mixing duties to the skilled hand of renowned studio wizard Jens Bogren in his Fascination Street Studios in Örebro, Sweden, ELUVEITIE returned to the very spot where they mixed their now legendary "Slania" album more than ten years ago. 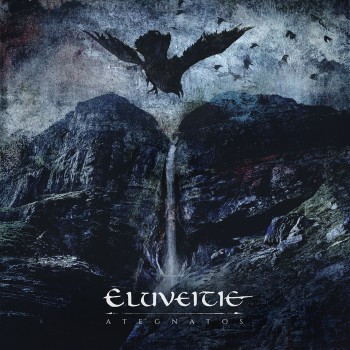