On paper this seemed like a very cool event and it was fun, don’t get me wrong here. But it could have been a lot better in many aspects. Day after Lucia in Kristianstad wasn’t the best day to have this kind of event in the middle of the Christmas shopping spree when money is tight anyway, and to get any ordinary citizen to buy the tickets for a lineup appealing to a rather die hard Metal fan was bound to fail from the start, especially if you consider the high ticket price. For me, to have Chuck Billy, Michael Kiske, Udo Dirkschneider, Floor Jansen and Joey Belladonna appearing in a town just half an hour a drive away is amazing. And the concept was very cool actually.

It was a sparse crowd though when the lights went dim and Chuck Billy entered the stage dressed in a tail-coat, of course backed up by a massive orchestra. To my surprise “More Than Meets The Eye” was the first track out. Sure, it is a new TESTAMENT hit but perhaps not at all that known to the big mass. “Souls Of Black” followed and went down a lot better. After the two songs, Chuck introduced Michael Kiske. It really doesn’t matter what he has said about Heavy Metal music in the past because he still can sing and it’s amazing to hear him do the HELLOWEEN classics, especially “March Of Time”. Also “Longing” from “Chameleon” (which not is as well credited as the “Keeper” albums) was very well-received. It fitted very well into the arrangement also. But why he would do “I Want Out” I can’t really understand; sure, it’s a big hit but it is Kai Hansen’s song...

Udo Dirkschneider was the next to hit the stage and opened his slot with “They Want War”, a very cool track from the first UDO album “Animal House” that should have fitted perfectly into the set here and been really massive with the orchestra. Yep! Should have... The orchestra was still on stage but they just sat there and here I started to realize that they weren’t playing on all tracks. I really can’t say which ones they were on up to here though, since they were neither prominent in the view nor very loud. I can understand that it is hard to arrange an orchestra for “I’m A Rebel” but “They Want War” should have been perfect for it. Udo also did “Metal Heart” before he gave the stage back to Chuck Billy who did a good version of “Practice What You Preach”.

After a short intermission where the orchestra got to shine, Floor Jansen hit the stage and did one track from AFTER FOREVER, “My Pledge Of Allegiance”. This of course is perfect since it’s rather symphonic on the first place. But that wasn’t the most impressive here - damn, she’s good. What a voice! A cover followed on HEART’s classic power ballad “Alone”. The Wilson sisters are damn good but Floor pulled this one off perfectly. Again, it felt very strange to have the orchestra doing nothing. It felt a bit of a waste I’d say - at least some violins in the chorus could have been a quickie... Floor also did the NIGHTWISH mega-hit “Nemo” before handing the stage over to Joey Belladonna.

This show was also announced as a night of their (or maybe the) biggest hits. But I still was very surprised when, as Joey hit the stage, the band started playing the BLACK SABBATH classic “Heaven & Hell”. As any metalhead is aware, Ronnie James Dio was one hell of a singer and to get into this and not pull it off can result in a death penalty. But I’ll be damned, Joey pulled it off with grace. He has such a great voice and much of it he never gets to show off with ANTHRAX. But again, no orchestra for this song, and not for “Anti Social” either. I was wondering if Joey was going to get to play with the orchestra at all. To my surprise they’ve rehearsed a version of “Madhouse” with a massive orchestra arrangement. Since this is a rather fast and heavy track, sure proved that it would have been possible to have this for every track on the bill. So, why not? (Of course, I get that it’s a lot of work to get it together.) Joey’s time in the spotlight ended with WHITESNAKE’s “Here I Go Again”. Surprised? I was but this one too sounded amazing with Joey singing it.

And then, what could have been a massive ending for the set turned into a flat pancake; Floor came back out in a new gown looking more stunning than ever and introduced, as the next track, the Broadway musical number “Phantom Of The Opera” with a little request. They didn’t have anyone to sing the male part of it, so the crowd (which had grown a bit but was still sparse due to the size of the venue) was asked to sing it. Come on!!! It’s not an easy track and to ask this felt a bit cheap actually. If there’s one person short, why do it? Or skit the talk and let Floor sing the whole thing which she basically did anyway. Again flawless!

But that wasn’t the lowest point of the show, nope... That was still to come. After “Phantom”, the rest of the guests hit the stage waving farewell and the crew ran out with music-stands with papers on it. After a very fumble start, “Silent Night” started sounding. Floor sang it but the guys couldn’t be more uncomfortable looking deep in the papers just miming to the words. It’s such a shame to end such a great evening with something like this. Sure, it might have looked good on paper but if no one really wants to do it, just skip it because the last impression will also last and it was painful to see all that. Else it was a rather nice event; a good setlist and cool guests! I enjoyed the whole thing very much, apart from the last few minutes though. And I would certainly go again if this will become a yearly tradition. Still, it felt like they fribbled away with a few things and it certainly would have been cooler to have the orchestra playing on more songs. Again, what looks good on paper doesn’t always work in reality. 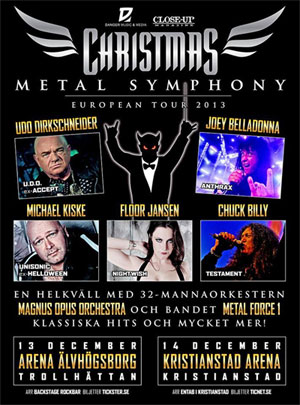