Forty minutes before ONSLAUGHT’s Chicago Thrash show METAL KAOZ grabbed Sy Keeler and had the following chat about the US tour and the immediate plans for the new album. Check it out. 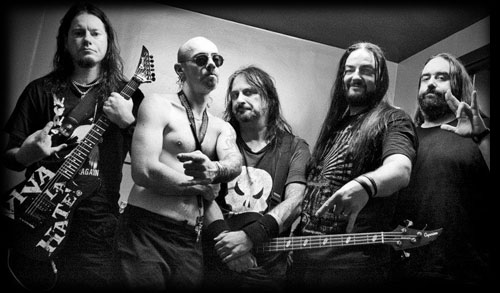 So this is the first headlining tour for you in North US?
It’s indeed, yes. Well, for a long time we were waiting for this.

The simple question that comes instantly in mind is why?
Back in the 80s we hadn’t really good opportunities to come here; I guess it was always very expensive, the flight rates etc. Nowadays it’s less expensive and the circumstances were right; we have a record company who backed us with the promotion and stuff like that, so we finally made it.

We are living in tough economic situation so saying this is the right timing sounds a little bit strange…
It’s yes and no. Well, we had our new album released last February and we did the European tour straight up, then we had that kind of a gap, we did some one-off shows and we went on tour in South America in last October.

Yeah, that should be great! There are a lot of old school fans there…
Yes, and there were some new fans too. It was really great! When we reformed we did our first comeback shows, again all the old fans come along. But things now have changed; the album did well, the right magazines supported it and we got some airplay, so we had some kids come along in the shows, 16-18 years old coming along, and fathers who were bringing the sons and daughters to the shows – it’s great. We noticed the difference, especially in UK: we did some shows there, 2 years ago and when we stepped onstage we saw in the front row some familiar faces from the old days. When we were with TESTAMENT we saw the crowd going crazy and there were a lot of youngsters! It’s amazing, especially in the UK. But it’s tough out there, yeah, unless you’re one of the big bands, and I am talking about the festivals for example, unless you are DEF LEPPARD or one of the big boys you don’t get paid. The small bands in festivals just don't get paid. There is a festival in Europe called ‘Metalfest’ that goes in Austria, Germany, Romania and they told us “we’d love to come and play but we can’t pay you a penny”. So, we asked who was going to cover the band’s expenses the flight tickets, hotels and they responded “sorry we can’t do that”. So, we did not play there since it’s not an option for the band to tour and lose money, it’s simple as that. If we were young, then we could do it, but as we grow older, we have responsibilities and we can not simply say “we will play for free for the next year”; it’s impossible.

So, what has changed musically in ONSLAUGHT, from your point of view?
I’d say experience in songwriting, I guess. Especially with the new album as well; Andy Rosser-Davies is the newest guitar player in the band of course and he is an accomplished guitarist and song writer he writes some gentle, romantic (laughs), well not romantic but yeah he writes his own songs and he sticks to a specific songwriting formula. Apparently there is a certain formula for ONSLAUGHT.

I was going to ask you about that…
Andy knows that we are doing things that way and he is strictly sticking to this songwriting formula.

Well, saying that, doesn’t mean you are playing it safe?
The album has hooks, you know, and we take pride of everything we’ve ever done. Take for example the younger bands; they based their music on the 80s Thrash by just taking the old-school formula without forging ahead with their own ideas. And sometimes it happens some of their songs being without hooks. I mean, in our case, you see the crowd punching in the air and singing the chorus with you.

How is the US audience treating ONSLAUGHT?
It’s been really cool. We started from Seattle – not a great Metal town anymore – so the tour started pretty quiet I think and things got busier and busier. We went to Texas, California was amazing, you know, the Bay area and L.A. was just great: it was a full house, great venue, it was awesome! Texas was amazing, especially on the border area, Mexico, El Paso. We’ve played in Mexico in the past and they are c-r-a-z-y! Those two shows were crazy! Dallas was awesome too. So, at St Louis last night was a little disappointing with 50 people. But as we said earlier, it’s tough out there. People haven’t got the money, even 20 bucks to go and spend them on a show. You are gonna pay for your ticket, for a few beers and to get to return home, an so on… it’s the same for the whole world.

And at the same time the band has to make some money and produce music. It’s a cycle. How easy is to choose songs for the setlist?
We have a core of songs especially when it comes to North America where we haven’t played before. People want to hear the classic songs from “The Force” and “Power From Hell” so we have to include them. And then we have “Killing Time” and “Sounds Of Violence” but we have just one hour. But the most difficult part for us to choose is to pick songs from the latest album. And if you think about it, we have songs from all our albums; we pick stuff from “Killing Peace” and we do some songs from “The Force”, so it’s difficult. And all the fans have some favorite songs and you don’t want to let anyone unsatisfied, so we tried to put everything in this one hour set.

What is next for ONSLAUGHT after this tour?
We have some summer shows and festivals and after that we are going back to writing next album. We are half way through in the process of writing the new album.

Do you have in mind a timeline?
There is a timeline, yeah. We are gonna to enter the studio later on this year, hopefully in October-ish and we’d like to have in next March – April the release. This maybe a little too long, almost 2 years since the last album; apparently time flies, but with touring and stuff like that, this is how things go. We all have day jobs, so you have to work your way through.

Do you have anything written, songs, lyrics, title, stuff like that?
It’s top secret (laughs). You’ll have to wait.

What can we expect musically?
What I can tell you is that it will be an ONSLAUGHT album. It will feel old school but it will also feature some new ideas. But you have to wait until it will be released.

Ok, Sy, we’ll wait till next year.
Thank you guys it's about time to get ready for this show!