BURNING WITCHES released “Dance With The Devil” just before the lockdown starting to spread all around the world. METAL KAOZ had a Skype session with Laura Guldemond who happens to be the newest member in the band, taking over the singing duties. Her coming to the band and her contribution to the new album were discussed, as well as H.P. Lovecraft... Have a look and check the “Dance With The Devil” album. 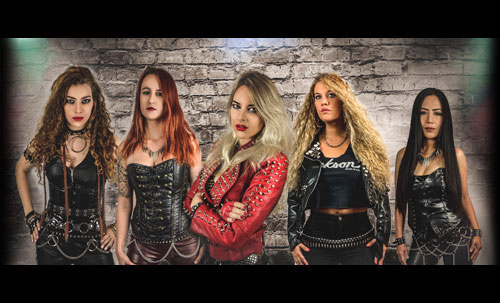 Hello Laura and welcome to METAL KAOZ! How are you?
Hello, I’m good. It’s a little bit late here, so I’m a little bit sleepy.

No worries, I only have 666 questions for you (laughs). It won’t take long.
Ok, great (laughs)! I will sleep easily after or even during the interview then.

So, let’s start right away; what are the challenges being a new singer in a band? I mean, you had to face some challenges replacing the previous one, right?
Yes. Of course, I had to learn everything in a short amount of time, so for me that was a challenge, absolutely. I think that after the audition I had two weeks to focus on that. The other one was that everyone has different expectations so you have to get to know each other a little bit. Now I’m actually going in a night-liner with everyone for the first time and they basically explained to me “well, leave your stuff out” and at some point the bus driver will probably throw it away so you’ll have to watch out. I mean, that’s an extreme example but I’m just get used to of the new situation. However, everything fell into place; I don’t have any troubles with the schedule and financially, you know. I’m lucky because I’m in a position where I have flexible jobs that can support myself and I doubt if I could do this if I would have been very poor. So, I’m happy that I have this flexible job as a freelancer. If this wouldn’t have been the case, then it would have been very difficult. So, all the pieces fell into place but of course my whole life changed because I had to be away from home a lot.

Well, yes, you have to do that. However, these are interesting times, right? The band is about to drop the third album so everything should be firing in all cylinders as they say. So, how did you learn about BURNING WITCHES and what was the thing that did interest you to join them?
I first learned about them because I think Sonia told me that they were going to audition, I knew her, and we played together a bit and I checked them out with the clip they had released and I really loved the music. Actually, I had checked them earlier, with the “Black Widow” – really loved that song. I really, really liked the energy, it just drew me in, my full attention. I like this; if music does that, I just wanna listen to everything then it is good. So this is what their music did to me, so I’m really happy I can now be in this band myself. It was a surprise of course and a very good one.

So, you were with SHADOWRISE that was a Symphonic Power Metal band, so what changes did you do to your singing for BURNING WITCHES?
Again, it was more getting used to everything because I did like the style and I could also sing this way. But I was used to sing with less distortion and what you’re used to is basically what you do without trying hard. So, I had to refocus on using distortion, so that had to become a little more of a second nature to use my voice in a way to really fit the songs, but I did understand it. So it was more like I had to focus a lot in the beginning and now it’s almost automatically. It’s really funny that you ask this because we had a break for a little while for the video clip and stuff like that so we’re doing stuff, we did interviews but we didn’t have a gig this year yet until last weekend, so the first one was in Sweden (February 28, I think), so I didn’t really practice the songs in between, and actually realize I did miss performing and I was looking forward to going onstage again. So, when I started practicing again, I noticed that I was using my newly-developed singing style more, so now I’m using more tightly-distorted and I noticed that some of the songs that she wrote for example, the “Burning Witches” song really needs relaxed distortion, it doesn’t work with a tight one – it’s not good for the song. So I have to actually focus on it again, but after singing it twice, it was ok again. It’s funny though; some things that I just usually go to, I have to do this now because it sounds good for the song. And if you write the songs yourself, of course you already go to the things you would naturally go to, so that’s what basically happens. Getting used to this a little bit until it happens automatically again.

I can only imagine. So, speaking of music-writing, how much were you involved in the making of “Dance With the Devil”, the album?
I wrote all the lyrics and melody lines. I did ask everyone what they would like me to write about and they said “something witch-y” and basically they just let me do what I would think would be cool because they trust me that I got the concept and knew that I like the old school Heavy Metal, I listen to it a lot, so they knew it would be ok. I just wrote them, and I wanted one song to really be about the band being strong, “Wings Of Steel”, being the first one.

I was drawn to the lyrics of “Necronomicon”, are you reading H.P. Lovecraft?
Not much, I just know about some of his stories. Actually, I’ve read a small part because I was curious and then I realized that his style is difficult for me to read. I read it in English.

Yes, you are right, and you are not the only one having difficulties. I do to but I like it.
So, maybe on holidays I’ll take the time to read more, but at the moment I don’t really have the patience to read books because I mostly watch movies and series are too addictive. For some reason, most of the times I feel like I have so much to do, so this is why I don’t read that much. When I was younger, I used to read a lot, but not H.P. Lovecraft, but I’ll keep it in mind for the future. Because it was so cool reading the Necronomicon story and I got inspired because it’s so much fun; you just write about something that is not real and people think it’s probably an existing thing. And put library cards in the libraries and people are seriously looking for it - it’s so funny. But reading this story made me realize that so many fantasy work is based on his stories and it’s so cool, and I’m so surprised because, to be honest, I wasn’t really into it that much, but I just got to know of the Necronomicon story and it really inspired me and that’s why I wrote about it.

And the song also is really good and it fits the lyrics.
Actually, I used to read a lot of fantasy stories but mostly adventure / fantasy like those from Tad Williams for example – I really love this kind of writers. When I was younger I had more time or maybe I was more relaxed.

Yeah, I know what you’re saying. So, “Dance With The Devil” was produced by Schmier and Pulver; why did you work with two producers?
That’s a good question; I don’t know. I think it’s just because Schmier knows what works for the songs vocal-wise – it was really nice he was there – and I think Pulver is better at making a great mix and understanding what’s good for the song also. Because if I look at the process, Schmier really helped me with the vocals and Pulver mainly helped with the technical parts; for example if I had a question like “something should happen here but I am not sure about the effect” and would say “I know what you mean or I don’t know but let’s try something”; he just really finished the songs. For example, “Necronomicon” has really cool effects to fit the horror theme – he used a lot of octavators for making it lower [lower octave]. So, those type of things we could try because of him. And it was really nice to have feedback from Schmier because always every musician is blind or has some blind spots to his playing style or singing, and the choices you make, so it’s always nice to have someone there who can help you better see. So, Schmier made it better than what have been without him, and also of course he has a lot of experience, and he is a good person to do this, as he is a singer himself. He came out with a lot of good suggestions and it was really nice to have some experienced people around to help with this kind of things. IT was just fine-tuned actually because he helped me with finishing it, putting the dot on the i, finishing all the small details. Also, I’m very picky myself so when I recorded most of times I was like “ok, now I have to listen to what I did” because it’s always nice to hear it in context of music, because if you sing sometimes, it’s difficult to actually know exactly what you’re doing for some reason and always sounds a bit different also because of a little bit of reverb on recording and stuff like that. They actually tried to push me to go a bit faster on some points.

Who had the idea to record that MANOWAR song?
I think it was Romana; Romana has being a big MANOWAR fan for a long time, and this MANOWAR song has this old-school ‘80s vibe because it’s old-school ‘80s (laughs); I mean, we picked this song because the vibe totally fits the character of the album, as it’s a pretty epic song. It also fits us as a band and it’s a perfect choice I think.

Is there any chance for BURNING WITCHES to play here in the US?
I really hope so; definitely we’ll take the chance if we have it, so let’s hope that there will be a chance. It would be cool to support a bigger Power Metal band or maybe even a classic ‘80s Heavy Metal band, if that’s possible – it would be pretty cool.

Well, you can always bring DESTRUCTION, right?
DESTRUCTION have a problem with a lawsuit – something is going on there and it hasn’t been solved, they try to solve it but they are not allowed to go to America for some reason, so that’s a pity. Because that would have been an option actually but now it isn’t. We have to wait for another opportunity.

Well, Laura, thank you very much for your time! I wish you all the best with BURNING WITCHES and hopefully we’ll see you sometime soon in the US.
Thank you, Dimitris – hope to see you soon!