Going to live shows is not only great because you will see your favorite band onstage. Catching the first bands on the billing is the most effective way to find out about new music because the stage is the best testing ground. I mean, if a band sounds awesome live, then imagine what they do in the studio. In this case, WEAPONS OF ANEW delivered the goods just before METAL ALLEGIANCE with their most energetic Metal with modern finishing touches. METAL KAOZ got on the phone the band’s guitarist, Freddy Ordine, to learn more about the band and get the latest update on the making of the second WEAPONS OF ANEW record. Read on. 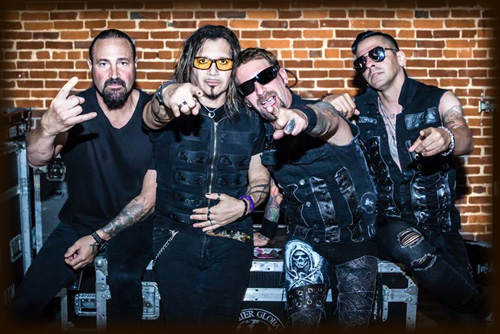 Hey Freddy, thank you for taking my call on this Saturday. Did you arrive home safe and sound?
Hi Dimitris! Yeah, we made it back last night; it was a 14-hour drive on the bus but we made it back.

At least the trip was worth it.
Absolutely, we had a great time there.

This was not the first time supporting METAL ALLEGIANCE, right?
We have played with them four of five shows on the West Coast and also in New York. We know a couple of guys in the band and we have a great time.

Do think you have earned a couple of fans in those shows? Musically WEAPONS OF ANEW are a bit different from what METAL ALLEGIANCE are playing.
Yeah, without a doubt; but we are kind of lucky because we can get in there and mix it up. We have toured with a decent number of different bands like ALTER BRIDGE, TESLA and then with METAL ALLEGIANCE. We mix our stuff a lot to find the space and room in those shows.

Right! You have been in AXIOM and HAVOCHATE, so what lessons have you learned being in those bands that have helped you or guided you when you formed WEAPONS OF ANEW?
The industry has changed so much over the years but we kind of approached this in the same way when Ray [West] came up from SPREAD EAGLE, and I from HAVOCHATE, it was the same thing; get out and get as many people as you can. If you are true in what you do it will all come together. For us it was all about the work ethic of nothing will come easy and you have to work for it. This was the main thing we had coming out as a new band. Play as much as you can and when you are out there show that you are on top of your game. Back then it was all about record sales and now it is all about streams, Facebook likes... (laughs) We have to learn as we go along.

Yes, times have gravely changed from how they used to be.
Back in the day, we stood outside the SLAYER show to hand out flyers to try and get people to know about the band. Now, there are people that do not know what a CD is... (laughs)

You are right, Freddy (laughs). So, the debut WEAPONS OF ANEW album, “Collision Of Love And Hate”, was released via OK! Good Records; what is the plan for the second one?
We are actually in the middle of recording it right now and the show in Chicago was the last show supporting “Collision Of Love And Hate”. We are probably 3/4 of finishing it up and now we have a new management because this was one of the lessons we did not learn… (laughs). We were stuck with people that did not change with the times and as WEAPONS OF ANEW started growing and developing, thank God, we met the right people who will be on our corner working for us with us.

Great, although my question had to do with having a record deal to release the new album.
We are in the middle of shopping around for a new deal. We have heard back from a couple of labels and from what I understand, we will have the new deal in December or maybe early next year as we are hoping to get the record out during the first quarter of 2020.

Awesome. Another thing that has changed nowadays is the record labels; they do not do much.
Yes, and for us the key is to be able to get us into big tours and make a little bit more streamlined for us. Someone to be more familiar with Rock and Metal. OK! Good Records have been great for us, they got the debut album out and did everything they could for us. But they are not in the right demographic; they are more like EDM and dance Pop record company, so they got us they did not quite know what to do for us (laughs).

Of course, there are record labels that you already know the music style of the albums getting released.
Exactly, so we are looking for a familiar home for us; someone to know how to market a band like us. That’s the main thing.

You said you are 3/4 done with the new album; are you talking about recording?
Yes, I think we have nine songs recorded out of the twelve that we are planning to have on the new record.

Are there songs totally new or did you use material from the “Collision Of Love And Hate” sessions?
Nothing old, everything is new. We toured a lot and in fact we wrote “Collision Of Love And Hate” without having played a show together. We kind of put the band together and worked hard for a year to get the band ready to play in a professional level. So, the record was written three years ago and then we got the ALTER BRIDGE tour, we toured with them for a couple of months, then we went out with TESLA and after that with Scott Stapp. We learned a lot and the band got to grow. We just wanted to get everything we learned over the years and put it to use; what we sound like today versus to what we sounded three years ago.

Is it the right thing to say that by doing these shows we learned each other and got a better understanding of what everyone can do?
Absolutely, we have grown together. When the first record came out we had been together for 6 months to a year and, as I said, we had not toured. Since the record release we have done a couple of hundred shows so the band really came together and has learned to work on a high level. The same goes with the writing even with producing; you know, for the first record we worked with James Murphy, who used to be in TESTAMENT and OBITUARY, and he helped us with that and this time we will work with Mike Ferretti who has done SEVENDUST, BREAKING BENJAMIN and stuff like that. We have gone complete new for this one.

Since you have listened to both albums, the old and the new stuff, how would you compare the debut and the second WEAPONS OF ANEW albums?
The first album has like a rawness to it which is really cool. The new record has a really refined sound and you can tell that the band has grown a lot; the song structures, the writing, the hooks when the heavier parts hit you they hit twice as hard compared to the first record. I would say this record shows a more grown up version of us.

Ok, got it. Listening to the debut and especially the song “Speed”, I noticed some almost screaming / growling backing vocals, so who is doing those?
Ray does all that stuff.

Oh my goodness!
It’s crazy how diverse his voice is. It is like having five different singers (laughs).

To be honest, I was thinking that you had some guest doing these vocals. Should we be expecting more of this kind of singing in the new record?
Yeah, sometimes Ray is singing these really pretty melodies and then sometimes is screaming like a nutjob… (laughs) This is why I wanted to work with Ray so much. My background is Thrash and when I wanted to start a new band Ray’s name kept coming up and I was like: ‘Not a guy from a Hair band. No, I do not want to play with a guy who used to wear make-up and stuff like that’. But when we got in the room together, he and I completely hit it off. He was totally not the person I thought he was going to be. We have so much in common and when I heard him singing, I realized how super-talented he is. He is insane... I mean, when he’s screaming, he means it (laughs).

My first impression watching him on the stage was that he is a genuine performer and knows what to do with himself while onstage, if you know what I mean.
Yup, and I 100% agree with you. He is born to do this.

So, you should not judge a book by its cover… (laughs)
That’s absolutely true. I have apologized for this but I am still making fun of him (laughs).

Have you considered releasing the album on vinyl?
The last album or the new one?

Well, I was thinking the new one but of course I would ask you about rereleasing the debut.
I am a huge vinyl fan and I have a huge collection. During my first week off from touring I just hung out in my studio listening to old vinyl records. So, I know that we have spoken about this a couple of times but I do not know because it will depend on the new label and if they want to do it. I would love to do it just for the fans. You know, when we are touring people love that kind of stuff.

Absolutely, although here in the States most of the vinyls come as imports and that can be a bummer.
I know what you are saying. We are lucky because where we live once every two or three months they have a humongous vinyl market and there are people coming from all over the place. I am not only talking about re-prints but also original pressings and that’s really cool.

Good to know, Freddy. What about music videos, are there plans to shoot any for the new album?
As soon as we have finished the record, we will start working on a music video.

Cool. Music-wise do you want WEAPONS OF ANEW to have a specific sound or do you want to keep the door open for experimenting?
Well, whatever comes out of us. I mean, when we wrote the debut record it was where we were at that point in time. I do not want to label the band as Thrash or as Hard Rock; we kind of take everything and throw it in. I think that no matter what we do, it will sound like us. Sometimes during soundcheck we try different things and even do Michael Jackson songs and still it sounds like us... (laughs)

How is the rest of 2019 looking like for the band?
Next year we are going to be touring. We have announced one show in Anaheim with METAL ALLEGIANCE [January 16] and then we have some other tours but nothing has been confirmed yet. As far as the rest of this year is concerned, the plan is to finish the record and be ready to go.

Great, Freddy, I wish you the best. We really enjoyed your set, so hopefully we will see you again in Chicago.
Absolutely man, thank you for the awesome interview.