They say “an apple does not fall far from the tree” and HATRIOT are ready to prove this by dropping “From Days Unto Darkness”, filled with the trademark Souza vocals. Although, this time around, it is Cody instead of Steve doing the singing, and man, he sounds great. METAL KAOZ had Cody Souza on Skype and, despite the sound issues, managed to have the following discussion. Read on and get your Thrash mood primed. 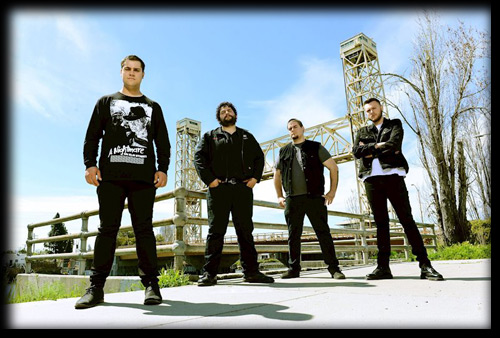 Hey Cody, welcome to METAL KAOZ!
Hi Dimitris, how are you?

I am good, man, thank you for asking.
I read your review; I appreciate your kind words. Thank you.

Absolutely, I really like the album. How does it feel that in about 12 days “Days Unto Darkness” will be released?
It feels pretty good, it has been a long album-process. Obviously, it has been some time since our last release, so it feels good to keep the thing going, and also feels good to hear the kind words people have said so far. We just enjoy being back at it again.

At what point did the band make the decision that Steve, your father, would not be able to handle the vocals in both EXODUS and HATRIOT?
We had a few shows lined up - I think one of those was with D.R.I. but can’t remember the other one - and EXODUS had something like a flash tour. So, we were in practice one day - I think my father was already on the road - because we did not want to cancel the shows and I started singing into the microphone; most probably, it was one month before the D.R.I. gig in San Jose where I did my debut. I just started mimicking his sounds [Steve’s] and making a few new ones on top of it, tweaking things here and there. And you could see my brother with his jaw dropped like "oh my god, you sound a lot like dad". And I kind of learned to play and sing at the same time. So, this is how it started.

So, this album is your debut as a singer?
On an album, yeah.

Oh my, because, frankly, one could easily fool me that your father is actually singing in this album too, aside from the growling parts.
Exactly, yeah. We are definitely singing in the same vein because obviously "monkey sees, monkey does" but I mix a lot of his vocal styles with some modern singer too. It sounds like him but younger and more energetic.

That makes sense. I guess, disbanding the band was never discussed, right?
No, we just continue to move on the same direction. This band is like a family project with the addition of Kosta [V.], our guitar player, who has been there since the beginning of HATRIOT and with whoever is playing the other guitar... No, I am joking, we are really happy with Kevin [Paterson]. So yeah, we just continue to strife forward, you know.

Now that you mentioned Kevin, I had made a mistake in the album review (it has been fixed) where I have Justin instead of Kevin…
Yeah, Justin was not part of this one; he helped to do some during the writing process but at the end of the day, he was busy with his own endeavors. He is still a good friend of ours, but yeah, Kevin is in the band now and he is doing a great job.

My question had more do to with how much Kevin was involved in the making of “Days Unto Darkness”.
Not too much to be honest. He was more involved into overseeing the album coming out, because most of the material had already been written. Kosta writes all the new material.

And my guess is that Kosta had a lot of material, considering that the album took so much time.
You are right, he had a lot of material and, as you said, we had a lot of time to make sure that the vocals were still in the vein we wanted them to be. We took our time with it, although we also have personal endeavors, like people finishing school, making career changes and this stuff comes first, you know.

Absolutely. The press release that came with the album says that the band had more freedom in this album.
Definitely; it wasn’t what pops [Steve] necessarily wanted at every given moment. It was more like a band’s decision, not that it wasn’t like that before, but he was definitely the driving voice. And because of that, we had more freedom to add a younger flavor to it.

Was Steve kind of a control freak? (laughs)
No, man (laughs) he was not like that. There were certain ways he wanted to fit his vocal style and this is totally understandable, if you know what I mean. There was no dictatorship - I don’t want to get such a message out. It was a splash of young with the old with him, and now, it is more like youthful with a splash of the old. The band is still on the same vein.

I totally get it and obviously I was joking. Now, that you listen to the finished product, do you see the band trying different stuff in the future? Experimenting a bit more?
When bands can go off the deep end when they do that, if you know that I mean. We are definitely going to explore more and we have a close group of friends getting opinions here and there. Pops is also part of that and, you know, it’s got to sound like HATRIOT moving forward - at least some degree of it. I mean, you won’t be hearing Classical music in the middle of a song.

Sometimes, bands end up being bound by their own sound and are not “allowed” to change anything.
Yeah, I know exactly what you are talking about. There are definitely more Death Metal influences in this one but the transition feels natural in a sense, because you can still understand it is the same band. Technically, there are no constraints, I mean, music has no rules.

I agree 100%. What about the lyrics in the album? Did you write everything?
I don’t have the entire list in front of me but I would say that I wrote 1/3 of them, maybe a little more than that. My brother wrote a few, Kosta wrote one and dad wrote one. I would say it was a collaborative effort like I did “Frankenstein Must Be Destroyed”, “Carnival Of Execution”, “Ethereal Nightmare”, among others, and Kosta did “Organic Remains”.

Now that you said that Kosta did “Organic Remains”, it makes sense to me because this song is one of the longest and rather complicated tracks. In fact, this became a favorite from the album.
Yeah, it seems that a lot of people are digging that one, for sure.

Kosta was let loose on that one, right?
Dude, he is an animal (laughs)…

Is there a connection between the lyrics and the album’s cover artwork?
The overall theme of the album is still very HATRIOT-like; we have Horror movie titles, titles on domestic violence still on the Horror movie, not that we promote domestic violence in any way, but the album highlights some of the atrocities of mankind. For example, “Carnival Of Execution” is about how people enjoy watching boxing, bull fights… I mean, people like gore, so it is kind of a tribute to that. We just write about stuff that - you know - are fuckin’ Heavy and Thrash Metal related. We have fun with it.

You could also throw the social media into “Carnival Of Execution”, although it is a bit of a different kind of arena, if you know what I am saying.
Exactly.

On a different note, do you know for where can we get the vinyl edition of “From Days Unto Darkness” here in the US?
I heard that the US is coming a little bit late as far as the hard copies are concerned. I actually want one badly but I haven’t gotten on yet, but once that happens, I will drop a line at the social media. I am not sure to be honest. Sometimes they chose to do a limited print afterwards but I need to ask the management to know for sure.

Cool, I’ll stay tuned. And speaking of the social media, I saw that you are about to drop another single online.
Yeah, I am kind of teasing towards to that one. I don’t think I am allowed to reveal the song title but it will be a Thrasher for sure.

Any videos on the making?
There are ideas and speculation about making actual videos and I believe the next one will be a lyric video. We want to do a music video and there are talks about this, but I cannot say much.

What are the touring plans for this album?
We are trying to do some over the weekend because we all have major careers and therefore, we cannot just say  "I am going to go on a long tour" and come back to get paid.

I guess, you are talking about the US, right?
Yes, but there are also talks about playing in Europe, like doing the end of the year festivals like we did before - that would have been cool - but we need to look into that.

Thank you, Cody, for your time. My apologies about the quality of the sound; it was not my intention to sound like a Death Metal singer.
No problem, man, keep it Death Metal (laughs). Thank you for the interview.

Hatriot - From Days Unto Darkness

Hatriot - Dawn Of The New Centurion