New year, and a new album release by THE CROWN REMNANT. That's right; less than a year since the release of "The Wicked King: Part I", the five-piece band from LA will be dropping its sophomore LP, and METAL KAOZ got the chance to send a string of questions to Geordy Shallan who is handling the lead vocals. Have a look below how he responded and prime your ears for the second part of "The Wicked King". 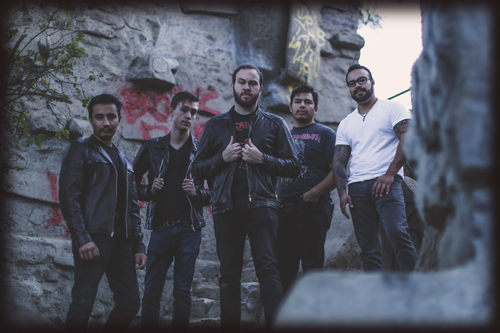 Happy New Year from METAL KAOZ! I am sure it feels great to kick off the New Year with a brand new album! How does it feel to have “Part II” coming out?
Same to you, guys! It’s freaking unreal - we’ve basically been sitting on this release for a year, making sure we did this right, so now that everything is falling into place, I’m so ready and excited to share it with the world.

At what point did you decide to turn “The Wicked King” into a two-album release?
Well, one day I was thinking about how digestible a 13 song record would be as a debut, and I felt that perhaps some of the songs would end up not getting the attention we all felt they deserve. Once that hit me, I mentioned it to Will, who agreed pretty heavily, and he brought up some points that further brought the idea home - oh, and then we began to recognize the marketing side of it. With that, we brought it to Art, Josue, and Jorge, and everybody unanimously agreed on it.

Did you separate the songs in a way to keep the same vibe / atmosphere for the two parts?
We did, actually! The songs with a more hopeful or positive nature, both musically and lyrically, all ended up on Part I. That’s why there’s songs like “Haunted”, “The Execution”, or “From Damnation To Deliverance” on there. The darker and more negative songs, like “The Wicked King” or “As Faith Fades” ended up on Part II.

Did you have all the songs ready to go from the beginning? Or did you write more songs for the second part?
Well, it’s somewhere between the two, actually! All the songs were originally written together as one piece, but after releasing part one, and analyzing what made us most proud as well as what we might have changed, we revised the songs on part two to reflect that.

Are there any differences between the two parts lyric-wise?
Well, outside of just the basic differentiation of Part I being more positive and Part II being darker I was talking about earlier - the lyrical content of both varies fairly drastically. Part II delves into heavier themes of things like hell, betrayal, and the apocalypse, and Part I is generally more hopeful, with themes of overcoming things like mental issues and the loss of a close friend.

The press release describes the second part as being “darker”; can you please elaborate more on this? Does this have to do with the sounds and / or the lyrics?
Well, it definitely has to do with the sound of the release and the lyrics alike. The combination of haunting and beautiful orchestrations, the vocal variety, and the musicality of the whole record all work together into a much darker blend than it’s more hopeful predecessor.

Are there any songs that you did not use in either parts but you plan to release them later on?
I can’t say anything just yet, but you might be onto something coming later in 2019...

What is the connection between the art covers of the two albums? At first look, “Part I” seems to be the ‘after’ and “Part II” is the ‘before’; I am sure I have gotten this wrong, so what’s the case here?
No, you’re actually pretty close! It’s essentially supposed to be a chronological showing of The Wicked King himself coming back to life - Part I being as he comes alive, and Part II being the beginning of his everlasting life.

You and Art have theater training, so how can this be implement in a Metal band?
I think in a lot of ways, but predominantly, I think that our training in that allows us to be very relaxed and comfortable on stage, allows us to recognize what to do with our live chemistry, and it also allows us to recognize how to put on a show that keeps the audience entertained. Also, the theater teaches you how to take constructive criticism very well, and if you’re in a band, that is integral to improving and becoming the best band you can be.

You have announced a set of US live dates up until February 02nd; what are your touring plans to support “The Wicked King: Part II”? Any plans to go to Europe?
We’ve actually extended that to the 5th now, which is crazy! I’m super excited. As of now, there’s no set tour or anything, but I know that we will absolutely make our way over to Europe at some point in the future - and in my opinion, the sooner the better!

If I am not mistaken, both albums are / will be available as digital releases; are the any plans to have the albums in physical format? What about vinyl which nowadays seems to be coming back?
They will be available in physical copies as well, too! We’re handling that right now actually - most likely we’ll have Part I and II together in physical form, so listeners can have that full album experience. We’ve talked to our friends at Jealous Youth Records about doing a limited pressing of vinyls, but nothing is set in stone just yet. Definitely a possibility though!

As a follow-up to the previous question, is the band handling the release and distribution of the albums? I mean, are you interested in signing with a record label?
We are handling the distribution ourselves as of now. I think that we’d definitely sign with a label if the right deal was offered or negotiated, but we’re in no particular rush. Having spent some time interning at a label myself, I feel it’s imperative to find the right team and deal before signing onto a new team of people that will heavily influence your art and your business model.

You have released a lyric and a music video for “Inferno”; will you be releasing more videos to promote this album?
Oh yeah! We’ve got a great video coming out very soon for one more song, one very different from “Inferno”, and I have no doubt there will be a bunch more video content coming from us after that.

Thank you, Geordy, for taking the time to answer METAL KAOZ’s questions! Feel free to add anything we did not address.
I think we covered a lot of a good stuff here! The only things I’d want to add would be to tell everybody who wants to keep up to date with us for all things pertaining to the band, our upcoming tours, and more, check us out on Instagram, Twitter, or Facebook, or check out our website. Oh, and a big thanks to you, Dimitris, for taking the time to talk with me. It’s been a blast!