With the last and self-titled album, FLOTSAM AND JETSAM got back in the hearts of the old-school fans (at least, for those who had forgotten them) and then went on the road to prove how great they sound. Some hours before the Chicago show, METAL KAOZ met Eric AK and Michael Gilbert and had this great chat about the making of the album and the band’s plans for 2017. Check out what was discussed below. 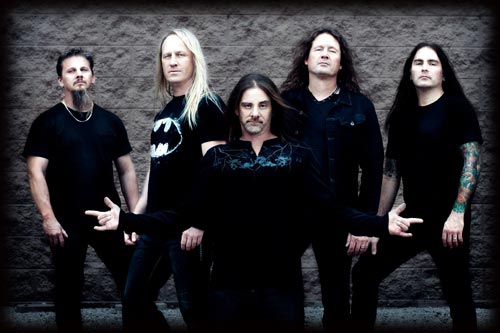 Hi guys, it’s a pleasure meeting you. Just before this interview, we were discussing about those MTV days when we used to watch videos like “Suffer The Masses”. Are we getting older, Eric?
Eric: Nah, everybody else is just getting younger... (laughs)

(laughs) I guess this is another version of the Law of Relativity… First off, the obvious question; how is the tour so far?
Eric: Really good, although this was not supposed to be our tour. We were supposed to be doing this thing with DEATH ANGEL but they had to pull out kind of the last minute, so we kinda had the agents keeping us on the tour without them. We grabbed a couple of bands to open up and went ahead.

With this tour, you also celebrating the release of “Doomsday For The Deceiver”, right?
Eric: Kind of. I mean, we are doing a lot of stuff from that album and we also have a new shirt with the 30th anniversary thing on the back, so we are kind of pushing this a little bit but we are also here to celebrate the new record.

What is the first thing that comes to mind when think of “Doomsday For The Deceiver”?
Eric: (laughs) Oh my, there are a lot of memories there. One of the first things I always think of, is Jason Newsted getting arrested somewhere at West Hollywood. One night we were out partying after working in the studio and he got arrested for something I cannot even remember (he had some weed on him or something), and we spent a bunch of hours trying to bailing him out. That’s the first thing I always remember when I think about that record. This was our first real recording process and it taught us a lot, and I think, it kind of opened us up to being able to make an even better second record. Because we knew what we were doing and looking for and how much of it was up to us. Every record since then has taught us a little more about, you know, what to expect, when we are going to do the next one.

Based on what you are saying, how much, do you think, you have changed as a musician?
Eric: A lot and pretty much in every aspect. Writing; I’ve grown so much over the last 30 years - it is unbelievable - and Mike has too, the business end of the industry. We’ve grown a lot and, in fact, we’ve been forced to grow really quick on this and pretty much every thing about this. The showmanship for doing a show, the setlist, the way we tour, where we need to spend money on and where we don’t. With every tour and every record we learn a bit more making it a little bit easier or smoother for the next one.

This makes sense, although nowadays the current situation in the Metal scene is far from being smooth.
Eric: Oh yeah, you’re absolutely right.

You chose to re-record “No Place For Disgrace”, so why did you do that?
Eric: We put that record out on Elektra Records and then we went to MCA Records for the next one [“When The Storm Comes Down”]. Elektra Records had some really great bands but they have been bought and sold by so many bigger labels and corporations over the years, so there is nobody who still works there since the day we have been there and so there is no one to keep accounting of anything or even have any idea that we have been on that label. So, when the time came to get the masters of that album to remix them, there were questions like“what are you talking about?” , you know?

Oh my, so you don’t have the masters of “No Place For Disgrace”?
Eric: No, Elektra Records had them and who knows where they are now... Most probably they are in some sort of vault somewhere and people have just forgotten about it.
Mike: They have probably recorded some Rap on top of it (laughs)...
Erik: Back then, we used 2inch chrome tapes to record, so who knows where the masters are now. Most probably inside someone’s refrigerator in his backyard.

Damn, and this was the final release you did via Metal Blade before moving to AFM Records. Was there any specific reason for making this change?
Mike: AFM Records had like a game plan for us, you know, they really had a sales pitch about what they wanted to do with the band. They came to us with their ducks in a row saying “this is what we want to do, this is what you want to give you, this is our time frame, so what you guys think?” It was like a freaking story book and we could not refuse it; it looked great and if it turned out to be successful, it would bring the band into another level. This is why we went with AFM Records and so far, they have gone above and beyond for us.

Did you sign a multi-record deal or is it a one-by-one case?
Eric:  Basically, it is a one-by-one deal. We gave them the option for a second one and they already said “Oh hell yes, we wanna do it”. And this does not bother us because they are doing a great job for us.

So, let’s talk about the latest album which you decided to call “Flotsam And Jetsam”; did you do this because you wanted to kind of reintroduce the band to the scene?
Mike: That’s exactly the reason why we did that; to reintroduce the band. We have the best lineup we have ever had and we all work really good together, you know, there are minimum fist-fights breaking out... (laughs) Everybody wanted us to go back to our roots. Over the years, we have been always experimental with our music and maybe this had not been the best for us. I mean, for us this is great because we write different stuff all the time but as far as fans are concerned, they want us to write the old-school stuff. So, we kind of went a bit backwards and tried to recreate what we did 30 years ago.

To be honest, I'm perfectly fine with a musician who does what he likes. I mean, if I like what I hear, it’s great and if I don’t, that’s ok, I can always find something else. I am opposed to the concept of fans requesting from a band to write this or that.
Mike: It still felt really natural for us to go back and write stuff like that. It is almost like putting your game face on, you know, I mean I cannot listen to Country music and then go write a Metal record. So, when I started listening to all that '80s Thrash, it got me into that mood and then I was ready to start writing again. And this is what came out because that was the influence I had during that time. All of us did this for this record.

And really, it came out fantastic. By the way, Eric, your vocals, man, are amazing. I will use a cliché phrase and say your vocals are getting better with time, like old wine. I don’t know how you do this, but please keep doing it because it works.
Eric: Well, the vocals are more like old Jack Daniels... (laughs)
Mike: He does a lot of whining though, so I guess this helps too... (laughs)

I believe you mean ‘wining’ like drinking more wine, right?
(Both laugh)

Did you write the songs for “Flotsam And Jetsam” after finishing the re-recording? I mean, is everything based on new material?
Eric: Yes, except from two songs which Spencer [Michael] had written for “No Place For Disgrace” but did not make it in the record.
Mike: In 1988.
Eric: Indeed, and we revamped them and put them on this record. These songs are “Legion Of The Damned”, “L.O.T.D.” and “Forbidden Territories”.

Awesome, and since you mentioned “L.O.T.D.”, what’s the story using acronyms?
Eric: (laughs) Well, in the case of “L.O.T.D.” it was kind of a long title and looking at the space on the back of disc we thought it would be better to use an acronym. It made it much easier to fit it on stuff.

I was going through the tracklist of previous albums and almost in every case you have an acronym as a songtitle, and in most of the cases that song was pretty much at the same position. So, I thought that there should be something special about this.
Eric: (laughs) Oh man, I wish we had some cool story about this. But the reality is that it is basically laziness and not wanting to spell the whole thing out (laughs). The one on “Doomsday For The Deceiver” [“U.L.S.W”] it was just a goofy / stupid title to put it in.

What was the full title for that?
Eric: (laughs) It was “Ugly Little Slimy Wench”…

(laughs) That’s a good one. So, after this tour, you head to Europe and then I saw some posts in Facebook about maybe going to Australia.
Eric: Yeah, we’re hoping to do so, and, you know, we are haunting our agents to get us over there, so we’ll see.
Mike: And I have to finish my therapy because the spiders there are huge and I am absolutely afraid of spiders... So, I have to finish my therapy before going there (laughs).

And then you can get one as a pet, right?
(Both laugh)

What about Latin America? They love you guys there.
Eric: We will go wherever it makes sense for us and to the places where we won’t lose a bunch of money getting there.

Cool. When do you think will be the right time to start working on the next album?
Eric: After the European tour, around March/April I think the focus will be on South America, so we’ll see.

Will you do a re-run here in the States?
Eric: Yes, we will in February.
Mike: As Eric said, this tour was from the remnants of the tour we were supposed to do with DEATH ANGEL. So, the plan in February is to visit cities we missed on this one.

This means that we won’t see FLOTSAM AND JETSAM again here in Chicago?
Mike: You probable will. Chicago has been always good for us or maybe in another part of the city. Are there places to play live outside Chicago?

Oh yeah, there are and some of them are really close to where we live... (laughs)
Eric: There you go, man.

Awesome, guys. Is there something else that you’d like to add?
Eric: Just that we are going to be out doing this and pushing until the release of the next record and then we will start all over again.

That's great and we are happy to see you guys doing this. Thank you and have safe travels.

Flotsam And Jetsam - The End Of Chaos

Hammerfall @ The Forge, Joliet (US)

Flotsam And Jetsam @ Reggies, Chicago (US)