If you take a moment to think about it, then you will agree with me; high quality music always reflects the high quality a musician has as a person and as an artist. So, it was not a surprise that I enjoyed the extremely nice and mostly friendly talk I had with Mr. Tony Clarkin who took a break from the studio to talk to METAL KAOZ about the making of “Sacred, Blood, “Divine” Lies” and the progress of the next album... Yeah, that’s right, he has already some songs, so keep reading... 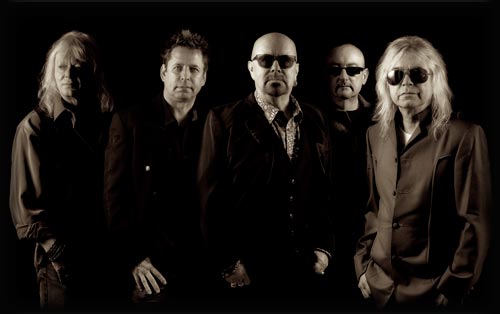 Hello Tony, how are you?
I’m fine, thank you.

It’s really nice talking to you from Chicago with the below freezing temperatures.
Really? I didn’t realize that you were calling from the States. Well, it is also cold here but probably not as cold as in Chicago.

Yeah, we are below freezing with occasional snow. But I have good music to keep me warm and obviously I am referring to the new MAGNUM album; it’s awesome, Tony!
Thank you, Dimitris!

First of all, what are all those sacred, blood, divine lies?
Well, I started writing this one without the music, almost like a poem, and these lines ended up in the chorus. I was working on a riff when I was in the studio and since then, I kept singing the song against this riff and this ended to be the album’s title track. But I guess your question was what the song is about; there are people in very high positions, who are sort of leaders in their countries or whatever, and they behave like gods and I think some of them actually believe that they are in touch with the divine. Also, the song is about some of us who tend to believe whatever they’re telling us. This is the general idea of what this song is about.

I guess this is how the album’s cover is connected with the lyrics of this one, right? I mean, there is this creature sitting on its throne with the vultures above it and all the riches on his feet.
You’re absolutely right.

And this was once again made by Rodney Matthews, so how do you usually work with him? Do you give him some general directions?
He comes to the studio with his sketch pad and what I do is tell him what the title of the album is going to be. Since everyone thought that “Sacred, Blood, “Divine” Lies” was a good name for the song and also for the album, I talked to him about the idea I had about this sort of evil bloke or monster-y type of thing sitting on top of pots of gold etc and the little guy in his school outfit with his dog and the entire castle-like setup. As I am describing all this, Rodney is drawing and taking notes. Then he goes away to work with all his ideas about the front and also about the back of the album. And the back of the album came out really good and was his idea. In the meantime, the record label goes crazy asking us to hurry up... (laughs) I actually went on an exhibition with all of his paintings and it was fantastic. I hadn’t seen the original painting of the artwork and it was there and everyone had his photograph taken in front of it (laughs). Rodney is great and I have been working with him for so many years and he always comes up with great drawings.

I’ll get the album on vinyl to get a good look on this. Is it true that you wrote 25 songs during the sessions for the album?
Yeah, I mean I write all the time. I am one of those crazy people who have to do this I guess. So, this is true; I wrote 25 songs and then knocked them to 16, then to 13 and then to ten songs. The three that we left out ended up in the bonus disc of the special edition where the videos are.

And what’s the plan with the material that you left out? Will you use them for the next album?
No, I never go back and listen again to that material. My theory about this is if I didn’t use these songs in the first place, then it means that they weren’t worth it. Sometimes when you’re working on a song, you think it will come out great but in the end it doesn’t and does not fit what you had in mind. This is how I always work and I chose the songs that I really like. And then I talk to Bob [Catley] and see what songs each of us like and then decided what to use in the album.

Some musicians believe it is not a good idea to start working on new music right after having finished an album because then everything will sound the same.
Well, I am writing songs now for the next album and, in fact, I have been doing this for about two weeks. I have a feeling in my mind or my body, wherever that is, and I need to do something, and since I have my own studio, I am constantly writing.

If this works for you and apparently the music that you make work for us, then keep doing it, mate.
I will surely do.

By the way, I love “Gypsy Queen”, so what exactly did inspire you to write this one when you were at St. Petersburg?
It’s a stunning place, really. There are some strange people there, I mean people who you thought to be scary (laughs). We played there but I cannot remember when it was; for sure it was a long time ago. Anyway, we are at Palace Square and there were all those people, who I call gypsies, walking around and it was like a painting with all these fantastic buildings all around. Although when we were there the place was not in its best possible state lacking some proper maintenance with big holes in the roads, the taxis had busted windows and  so on but still, there was a certain atmosphere and this is what inspired me to write this song.

Do you carry with you a notebook to write song ideas the moment you get inspired?
No, I don’t and maybe I should... (laughs) When something really affects you or you get a great feeling out of it, it never leaves you.

Although the way we live nowadays we have acquired a short term memory; I mean, we are flooded with information so at least I forget things.
Well, whatever has to do with lyrics and music, I don’t forget; lots of other things I do forget (laughs). I guess this happens when your memory gets too selective.

You made a video for “Crazy Old Mothers” that according to the press release talks about someone who is working a job that he hates; have you found yourself in such situation?
Yes, sure.

And what’s your advice?
My advice would be listen to “Crazy Old Mothers”... (laughs). I wrote this one after meeting some guys with whom I was in my very first band something that happened around 1966. Obviously that band only lasted for a certain period of time but we still meet every Christmas. So, one of the guys was like “I wish I had never stopped playing” and so on. I mean, this bloke saying this stuff was a really good singer and he could have done more but it is what it is. And this is why I wrote this one.

And what about the next MAGNUM album, since you said that you have already started working on it. What’s the plan? After all, the paint on “Sacred, Blood, “Divine” Lies” hasn’t dried yet…
(laughs) Well, I have written about six songs but this does not mean all of them will be MAGNUM songs or even be any good. After returning from the tour, I will listen to them again and maybe I will discard some of them. Like I said, this is something that I just need to do and not something I have to do. I mean, there is something in me making me want to do this; I don’t know.

I think it’s called being an artist (laughs). Speaking of touring, you have announced some shows in Europe from April to May and then you have a festival appearance in July but what the situation with MAGNUM and the States? Is there any chance to see the band live here?
I don’t think so; unless there will be some really generous promoter who will invite us (laughs). This is probably of those things that you call regrets; I mean, I regret that we never made a dent in the American market and never played there. Well, we played there as a supporting band for Ozzy but this happened many, many years ago. I wish we would have continued playing in the States but we never did. Although, our bass player lives in the US...

Well then, he can invite you…
(laughs) Yeah, I guess he could.

Anyways, I can still come to Europe to see MAGNUM. Tony, it was a great pleasure talking to you and a greater pleasure listening to the album. If you have something that you'd like to put it out there, feel free to do it now.
I really don’t have something to add; I think we covered everything. I know this will sound a bit of a cliché but I do hope people in America will enjoy the album as much as we enjoyed making it.

Yeah, and then we can maybe convince to cross the Atlantic for us.
Yes, who knows... Thank you for having me, Dimitris and have a great evening. Take care!