Sweden’s Speed metallers ENFORCER released recently “From Beyond” and are gearing up to take the new music on the road. METAL KAOZ talked to Olof Wikstrand to see what this band has in store for us and discussed their plans to come to the US for some live shows. 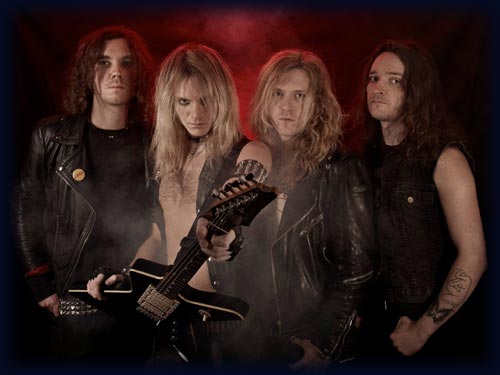 Hi Olof, welcome to METAL KAOZ!
Hi Dimitris, thanks for having me.

Just by looking at the ENFORCER back catalogue, I see that you had some split or single releases in between LPs but not this time; was there any reason for this?
Well, the singles we have released did not contain exclusive songs or anything. The singles were special releases for occasions like the Record Store Day or before a specific tour. This time we just released one single before the previous album and nothing more.

Ok, but it still cool to have all these 7” vinyl editions…
Yeah, you’re right, and we’d like to do this but we want to put something special like exclusive material and not just put a song from the album just for the sake of it. Just like we did with the “Mesmerized By Fire” single where we had as a B-side the NAGASAKI cover.

And since we are talking about exclusive material, do you have any leftovers from the “From Beyond” sessions?
We don’t have any leftovers but we did a three covers which are in the Japanese edition of the album. We did VENOM’s “Bursting Out”, MOTÖRHEAD’s “Mean Machine” and MISFITS’ “I Turned Into A Martian”. The VENOM had been already released in digital form so this was the way to have this on a physical format.

And these songs are only for Japan, right?
Yes, you see, people in Japan are still buying records, so you have to make it really special for them, otherwise they will buy the cheaper import versions. It’s always nice to make something special for them. In Europe, the CD sales have plummeted but in Japan, the numbers are pretty much the same.

This is very interesting. So, how long did you work on “From Beyond”?
Well, you know all of us we were constantly working on stuff on the back of our mind. I have always music in my mind and I am getting inspired by stuff. It was a year ago when we sat down for the first time to collect what we had and then found out that we had more material than we were expecting. We ended up writing entire songs from the ideas we had, and the entire process went down really quickly, so we had the new album written in just a few months.

That’s quite fast.
Yeah, we have found our writing style in “Death By Fire” and have established the way of doing things so we are really comfortable with the entire process.

So, from your point of view, you did nothing new as compared to the “Death By Fire” sessions?
No, we did not change anything as far as the producing and the song-writing are concerned. We are really happy with the sound and the production of the previous album, so the idea was to do something like that. So yes, we basically wrote the “From Beyond” the same way we did “Death By Fire”, although this time the album was more of a band effort; every band member contributed to the album almost equally and this added a certain level of diversity because each of us has a difference musical view and way of doing things. I also think that following the same method in the production, “From Beyond” has a better sound because we learned from working in the previous record.

You did the production right?
It was me and Jonas.

How come didn’t you think of working with a producer? I mean, get a famous producer and get this ‘larger than life” sound?
Well, I think we have created this ‘larger than life' sound and we did this better than anyone else. And this is the reason we didn’t find a producer; I mean, there is no one who can produce the sound we like and want for the album. We are not doing this to save money but because we don’t trust anyone to work on our music.

Since you said that this album was more of a team effort, do you think this is how ENFORCER have evolved with time?
Yes, and in fact this is a mistake bands make and reach a point where you run out of ideas since you have been limiting yourself by thinking of what you can and what you cannot do. I mean, following this path, things will get less and less creative the longer you go, so it’s really important for us to not limiting ourselves and try different directions.

Still, in Metal this happens all the time…
Of course, and this is why I don’t like many new Metal bands.

I was intrigued by the lyrics of “Mask Of Red Death”, so what’s your take on this story by Edgar Allan Poe?
Well, Joseph wrote the lyrics for this one, so he could tell you more about this. The idea was not to recreate the story from point A to point B but try to capture the atmosphere and less the actual storyline.

Got it. You did a video for “Destroyer”, so will you release a second one?
Yes, we have filmed a video for “Undying Evil” which will be released soon.

Cool, and what are your touring plans to support “From Beyond”?
The plan is to tour as much as we can and bring the music to everyone who appreciates it. First we’re going to do a European tour during Fall and then come to the States in winter around January and February.

The weather during that time here in the States is really harsh to say the least…
Yeah, we know and the reason for doing this is because no other band will do it at the same time.

Are you talking about the East Coast of the West? Or both?
Both but really we are in the planning stage. We want to get a couple of bands with us and make a touring package with - let’s say - 3 or 4 about our size. At the moment I don’t know what those bands will be.

If you were to choose the bands to tour with what would you choose?
CAULDRON!

Canadian Metal, that would be awesome!
They are the best people in the entire universe!

Oh yeah, and they make great Metal!
Of course, they seem to know what they are doing.

I guess it’s something like Sweden; I mean, many Metal bands come from there.
Yeah, just like you said, too many... (laughs)

(laughs) …any plans to release a DVD?
Well, we filmed one in Japan last year and we have to see under which circumstances we will release it. Hopefully, we will do to mark our 10th anniversary this year. We are working on it right now, so I can’t really say ‘yes’ or ‘no’.

Aside from the DVD release, are there any plans to celebrate the 10th anniversary?
The rough plan is to maybe collect some unreleased material, do some live stuff or just the DVD. We are currently discussing our options and what is possible to do. We will see and, in fact, the actual anniversary is not until the very end of this year, so we have some time to plan.

Cool, I have one more question for you, Olof: is CORRUPT an active band?
No. But you never know, man; I mean, we reached a point where we didn’t have the time to put on CORRUPT. Anyway, we will see about this; after all, you never say never. I guess I wouldn’t say the band is split-up but just that we will play again together and we feel like doing.

Fair enough, Olof and thank you for taking the time to talk to METAL KAOZ. Hopefully we’ll see ENFORCER live in Chicago during the harsh winter.
Thanks man, it was a pleasure. I am pretty sure we will have a show there in Chicago.