This was kind of a last minute arrangement, but having once again Geoff Tate and his version of QUEENSRŸCHE in Chicago was a perfect opportunity to get the latest update on his doings. So, after overcoming the connectivity problems, we got Geoff on the phone a couple of hours after landing in O’Hare airport and had the following chat. 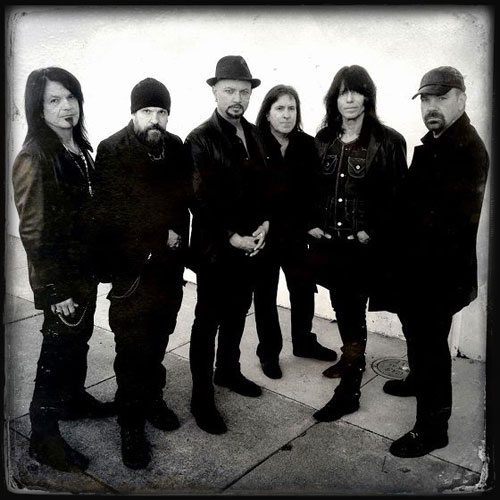 Hello Geoff and Happy New Year! How are you?
Hi Dimitris and happy new year to you too. I’m good, thank you.

I know that you’re in a tight schedule, so let’s start right away; you have announced a new string of US live dates in the context of the 25th anniversary of “Operation Mindcrime”, so how did you decide to add more dates?
Well, we haven’t played on the South-East side of the US for this tour, so this worked out without further reschedule - it felt like the perfect time.

Awesome! Since you’re gonna play again in St Charles tomorrow (the last time was in May 2013), can we expect any changes in the setlist – at least for the encore part, any surprises?
Possibly yeah; but I’m not going to tell you, because if I did, it wouldn’t be a surprise anymore, right (laughs)?

Have you ever though of recording new music together?
No, we haven’t really talked about it.

What about Europe; any thoughts to getting this tour on the other side of the Atlantic?
Hopefully yes and I think there are some possibilities for this summer. But honestly I have nothing solid to announce; after all, the year is still young.

The last time we talked you said you were working on new material for a trilogy album; how is this project going?
At the moment the project is not going anywhere due to the touring, holidays and all that. So, there is nothing solid yet. I am sorry but I have not new news (laughs).

Has the QUEENSRŸCHE name legal issue anything to do with this delay?
Yeah, but I again know nothing how this is going; sorry...

Fair enough, man. So you have been playing live with this line-up for quite a while; do you think that you will also work together in the studio?
I think that might happen down the road. Yes, there is a possibility, but we haven’t talked about it.

You have announced a three-dates show in Seattle, the ‘Rock And Vaudeville’ dates; what about the setlist – what songs are you going to use?
It’s a history of Rock; so we start at the beginnings of Rock music, somewhere in the 1950s and we kind of work our way up to the present day with a selection of songs that I feel were instrumental in the history of Rock music.

Are you also gonna have some spoken parts or even narrations of stories like you did in ‘Cabaret’ tour?
Yeah, it’s kind of a presentation, you know; it’s music, it’s talking, it’s visual entertainment with performing artists all combined all in one show.

Would it be possible to add more dates for this specific event besides Seattle?
Possibly, yeah.

That would be awesome! And I read somewhere that you would be involved in writing the music score for the movie “Fallen Moon”; so any updates on that?
No, that entire project kind of sailed away. They lost their investment funding, so I haven’t heard back from them if they are going to try it again or what.

You did a guest singing for THE VOODOOS song, “Facing My Demons”; in a post I read that you were kind of moved by the lyrics so how did those lyrics touch you?
Sometime last year Mark [Mark Daly, THE VOODOOS vocalist] played for me an acoustic version of the song, actually this happened in my living room (laughs) and I really liked it quite a bit. And a year later they said they were about to enter the studio to record it and asked me if I was interested to sing on it, so I agreed to it and I think it went really well – I really like the song a lot.

Did you contribute to the vocal arrangements or in any other part of the song?
Yeah, I contributed to it.

You and Rudy will be joining JUDAS PRIEST in the Rock 'n Roll fantasy camp in Las Vegas, so what are you gonna do in this camp?
It’s kind of a camp where people come to learn about music and play with an ensemble  of people and talk to people that have a lot of experience in music, either arranging or writing and/or performing. So we act as some form of a coach I think and we talk to people and they hopefully will find some kind of inspiration from us and vice versa; I think it can be very inspiring and, in fact, Rudy has talked to me quite a bit about it; he seems to think that it’s really an amazing experience, so I’m pretty excited about it.

Would it be interesting for you to start coaching other singers and talk to them about performing?
I don’t know, I have never done that, so this is kind of a new thing for me and it will be interesting because there are several workshops (on performing, writing or composing) and I will be involved in all that so it’s kind of pretty in-depth camp.

Now that I mentioned Rudy, for the St Charles show you’re gonna have QUIET RIOT with you, so how did you add them in this show?
Actually, I think the promoter was interested in putting us together.

I have one last question for you, Geoff and I’m gonna leave you; you have the Insania wines (the white and the red one). Are there any thoughts or plans to release a new, different one? Maybe a merlot one?
Not at the moment. Do you like the merlot, huh (laughs)? I’ll keep that in mind.

Ok Geoff, thank you for taking the time to talk to METAL KAOZ again!
My pleasure and I’m sorry I didn’t have much to offer at this moment, but we are kind in a holding pattern right now but we’ll be in touch.

That’s ok; we’ll discuss things when you’ll have more news about the upcoming trilogy – that sounds exciting.
Great! Thank you for the interview, Dimitris and see you tomorrow.