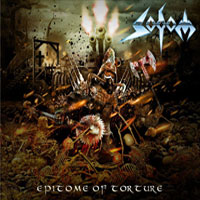 SODOM belongs to the small group of bands one can trust with eyes shut and their discography is the solid proof for this. I mean, there are not albums that you’d wish the Germans have not released and in fact, they have been serving the Thrash scene non-stop from the early 80s. Sure, there was a time period when the albums did not have that oomph the old-school Thrash-heads learned to love with “Agent Orange” and - of course - “Persecution Mania”. What I am trying to say is there is a certain Thrash quality in every SODOM album that you don’t have to possess a PhD in music to see/hear after having pressed the play button.

So, the German steamroller, having again Waldemar Sorychta sitting behind the soundboard, is back after the really good “In War And Pieces” that saw the light of the day almost three years ago.  Although “Epitome Of Torture” smells SODOM from miles away, I think it hides an attempt of the band to revisit almost every era. This means that the album has groovy songs in the vein of “Better Off Dead”, heavier thrashers breathing the same air with “Tapping The Vein” and maybe tracks that share the same warlike ­brutality of “Agent Orange”. Everything sounds in place and songs like the riff-based “Stigmatized” (where it will be hard to recognize Angelripper’s vocals, you will enjoy the trademark snare drum action) or the guitar-based and groovy “Cannibal” that offers some quality headbanging time, no questions asked. But (there’s always a ‘but’, right?) my complaint is that everything sounds too perfect for my SODOM taste. I missed the MOTÖRHEAD-inspired bass-guitar noise and the solid wall of sound that leaves no-space to move or even breathe. Maybe Sorychta over-did things and over-polished the sound of the Germans like in “Shoot Today - Kill Tomorrow” where the vocals are on the limelight covering the rhythm section that is one of SODOM’s trademarks. Maybe I am too old for these sound productions, but I was expecting something more traditional for one of the two bands that got me into the German Thrash scene (yeah, KREATOR is the other one). It’s most probably a matter of taste, but where is the overwhelming volume of the bass lines that is so missing from the otherwise killer “Invocating The Demons”? I guess this one sounds too melodic, based on the band’s backcatalogue.

One of the album’s highlight is hands-down “Katjuscha” (in Russian Катю́ша) that talks about the Russian rocket launcher (I am sure you’ve seen one of these weapons in action in a History Channel documentary) starting with the melody from the same-named old song and continues in the same path with other famous SODOM war-themed songs. Yeah, this is closest to the sound I like, even though the guitar leads are too clean for my taste. But the drum action and Angelripper’s singing are a win-win situation.

If “Epitome Of Torture” was released from another band, I would have rated it with a higher grade simply because it is a very good one. But as I said, it comes with a different than with what I was accustomed to, so my advice is to check before buying, unless you are getting every SODOM album like I do.