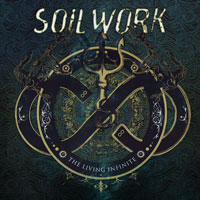 SOILWORK created quite a fuss around their name during the late 90s hitting the scene with great albums and many believe that they inspired many bands in the evolution of the Metalcore genre. Even if I am not a fan of Metalcore, I still consider SOILWORK a very good band (blame the melodic Death Metal influences for this), even though somewhere after “Figure Number Five” I kind of lost track (and maybe part of my initial interest) of the Swedes. Anyway, “The Panic Broadcast” was good enough to remind me of SOILWORK so I think I was looking forward to their next step, even though having Peter Wichers out of the lineup (again) did raise the difficulty level in terms of music-making.

I have to admit that it took me more time than it usually does to decide whether I like this album but this was expected since this is a two disc release, literally packed with music. I don’t know if the band wanted to prove that SOILWORK can still write music without Peter Wichers but in any case this is a huge project to finish.

“Spectrum Of Eternity” opens the album with a very nice and catchy melody that quickly steps into well-known melodic Death Metal territories of the Swedish origin. “Speed” sounded pissed and at the same time melodic implementing the clean vs growling vocals recipe at ease. SOILWORK still try to sound progressive and the keyboards help a lot to this direction, adding more colors to the Swedes music palette. This becomes pretty obvious in the next track “Memories Confined” where the almost Hammond sounding keys add more flavors and hence make the result interesting. You see, it is very easy to sound repetitive and predictable in the Gothenburg Metal scene, but without doubt SOILWORK have avoided falling into this trap. In the same wavelength is “The Living Infinite I” where the down-tuned clean guitar melodies pass effortlessly the baton to the distortion and the catchy/headbanging groove, following the Swedish norms.

Since I hate pretending to be a music expert or a professional critic (as if this is an actual profession), I will admit here that I wouldn’t be able to tell that SOILWORK did not have one of the main songwriters in the lineup during this album’s creation. I mean, the album sounds interesting in its entirety, even if one needs double the time to choose the highlight songs, since “The Living Infinite” could easily stand as two different releases. Sure, it is difficult to remain focused and keep track of what is happening after one and a half hour of listening, but please, trust me on this and you will be rewarded. So, roll up your sleeves because a lot of headbanging is expected coming at your way. My personal picks for this album are: the melodic breaks and vocal harmonies of “Whispers And Lights” and “Long Live The Misanthrope”, the guitar assault of “Leech”, the riff driven “Parasite Blues” and I shouldn’t forget the addictive “The Windswept Mercy” where NEW MODEL ARMY’s Justin Sullivan does some nice guest singing. I don’t care if SOILWORK managed to prove something with “The Living Infinite” but without doubt the winners are all those metalheads who will spend one and a half hour discovering all the goodies the twenty tracks hold in the bag.