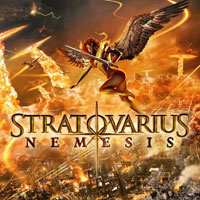 I am one of those STRATOVARIUS fans that were deeply hurt by the entire commotion between Tolkki and the rest of the band and the resulting decision to go separate ways. Although it still sounds strange to me watching one of the original members giving up all the legal rights to band’s name. At least, this situation did not turn into a soap opera and everything was dissolved in a civilized manner taking into consideration similar occasions. And this also means that I have trouble to deal with the second and non-Tolkki era although I did check “Polaris” and “Elysium” while trying to re-evaluate my opinion about the new version of STRATOVARIUS. Ironically my interest for the Finnish band was refueled after I had learned the news about Jörg’s health issues that fortunately ended well for the most talented and veteran drummer.

And this brings me in front of the brand new STRATOVARIUS album that will soon hit the stores getting the band on a Euro tour having as supporting act AMARANTHE. I guess the question that comes with every new STRATOVARIUS album is whether it deserves a spot in a discography on the side of albums like “Dreamspace”, “Fourth Dimension”, “Visions” and so on. I will start talking about “Nemesis” backwards by boldly saying that this album is worth of a spot on STRATOVARIUS’ backcatalogue without blushing out of shame. No, this did not become clear with the straightforward and catchy album opener “Abandon” although I did some virtues that I have missed in the last four or maybe more albums. There is a distinct driving groove and that kind of spirit-lifting melodies that made this band so famous among Power Metal circles. Things started to work with me with the extremely nice keyboard intro of “Unbreakable”. Here Timo sings at his best, delivering killer vocal melodies that lead to a trademark STRATOVARIUS chorus that may have something from the “Visions” days. At the same time, there is a dark atmosphere lurking in the background that I think prove how this second-era lineup has matured and – why not? – has solidified its sound profile. Don’t forget that there have been many lineup changes in the STRATO- camp so it’s not that we are talking about the 90s band that took the Metal scene by storm. “Halcyon Days” is surely one of the album’s strong songs having some of the “Elements” days with slower keyboard-driven parts but with a killer and faster chorus, able to make this a classic for future setlists. Maybe it is only me, but I think I found here some KAMELOT finishing touches in the “Halo” vein and that’s equals to a higher rating according to my judging scale. Also, don’t forget the overall sci-fi aesthetics (blame the keyboards for this) and the – yet again – awesome singing lines. “Dragons” is definitely another hit-to-be and also a song that took my mind back in the old days via the fat rhythm guitar (btw great bass sound) and the nice leads that smell STRATOVARIUS from miles away (even though they do not come from Tolkki’s magic fingers).

There are no two-digit time song durations in this album and I guess the band tried to re-defined itself by reviewing the past works via a modern looking glass that – as I said – sounds like maturing to my ears. The self-titled song closes the album in the best way with a catchy main riff, galloping rhythm and multi-pitched vocal lines that add a level of complexity taking one step away from the multi-played Euro Power Metal clichés. Ok, the keyboard solo is a classic here but after you have given this a listen, you’ll get my point.

The bottom line is that the Finnish band managed to renew by interest with an album that has been in my daily playlist for quite a while. So, if you somewhat missed STRATOVARIUS, “Nemesis” is a good (re-) starting point that I think can be a precursor for more. Of course, time can only tell.