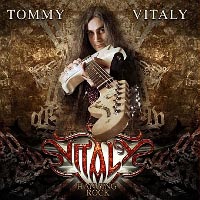 This name reminds me of something. I try to recall if he’s a solo virtuoso guitar player from Italy or some ex-member for some Euro Power Metal band. And it seems Tommy Vitaly is... both: he’s been a member of Italian melodic metallers SEVEN GATES until he decided to go solo and focus on using his guitar and keyboards mastery for some individual releases. The “Just Me” debut scored some success – mostly in Japan – in 2010 and now Tommy presents his sophomore solo effort called “Hanging Rock”.

First thing that took me by surprise was the guest participations (see the tracklist below) in this CD. Woah, how the hell did Tommy manage to invite all these musicians? Ok, let’s proceed. “Betrayer” is a fast opener with one leg on traditional Metal and the other on shredding Power Metal and fits nice for a start. “Run With The Devil” sees a main melody theme and turns into a melodic classic Metal jewel that transforms into a Scandinavian melodic Metal piece, with the impressive voice of Carsten “Lizard” Schulz (EVIDENCE ONE, DOMAIN) on top. “Hands Of Time” features the newly recruited Todd LaTorre (CRIMSON GLORY) on vocals and carries the trademark HELLOWEEN legacy with the harmony solos but when it comes to the couplés the vocals reach for the sky in malice.

The legendary David DeFeis (VIRGIN STEELE) sings on “Forever Lost”; a ballad he can obviously handle and it shows what kind of impressive throat this artist had/has (else the song itself would be a little bit lame). “Idol” resembles a lot to the STRATOVARIUS or CONCERTO MOON songwriting approach and even if it’s a little flat it’s saved by the impressive guitars work (rhythm and lead). “Misanthropy” is an instrumental tune and possibly serves as both an album intermezzo plus an artistic showcase from Vitaly who anyway is a fluent and expressive musician (but not my main cup of tea). “Heavy Metal God” is as straightforward as its title declares but with a weak smurfy solo; again the vocals of Schulz shine on here. “Hanging Rock” starts as a neoclassical piece while it afterwards features a lunar piano break that has something to say to that genre’s fans. “Icewarrior” wraps up the album (and that’s pretty bad for the album’s tracklist sequence marketing) is possibly the finest track in the CD; I’ve not be enticed by CIRCLE II CIRCLE’s works but here Zak Stevens delivers an tremendous performance and the in-your-face thunderous song backs him equally fine.

The musicianship is sold and confident here – even if I got a little bit tired by Vitaly’s repetitive neoclassical leads formula – resulting in an album fans of Neoclassical Metal or melodic Power Metal will surely fancy. Nothing groundbreaking, some pleasant spirit, a good sound... seems to be a possible purchase, if you ask.