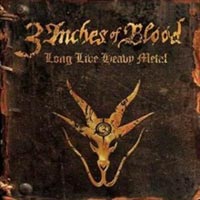 I had been kinda of avoiding 3 INCHES OF BLOOD due to the high pitched vocals that definitely fall out of vocal-taste despite the Canadian ancestry that is able to vouch for a band’s quality (ok, not always but still you get my drift). But after watching the band onstage, I started changing my mind and as soon as “Long Live Heavy Metal” had been released, I felt that I had to give them a fair chance.

It’s always fun when an album comes to change one’s initial opinion about a specific band, so I was happy to acknowledge that the high pitched vocals was a pathetic excuse for not checking out 3 INCHES OF BLOOD. The album’s title maybe cliché but at the same time cliché is something we are so used in Metal and there are genres out there who are based on the exactly the same recipe (no, I won’t say that Power Metal is one of those cases...). If a band can meet those pre-defined requirements and an album is good, I really don’t see a point for not adding that to one’s collection. Although in 3 INCHES OF BLOOD’s case I’d say that the predictable song structures are well-hidden under the energy fueled composition and the awesome double guitar work following the early IRON MAIDEN’s lead. Having listened to the album more than enough to write this presentation, I have no problem accepting the fact that the vocals sound absolutely fine and in fact fit the music like peanut butter does with jelly. The lurking JUDAS PRIEST references especially in the “Electric Eye”-esque “Metal Woman” is a strong plus for me, coming seconds before the songs explodes with an awesome double guitar work and a hearty collection of leads and fills. Really, the guitars are all over the place while the solid bass lines create solid Heavy Metal foundations.

“Leather Lord” is a fast track that almost lays hands on the Thrash territory as the riff driven structure, the bass drum pedaling and the harsh vocals turn into a fine reason to headbang. Here the lead guitar work really shines during the solo and the main melody that will stick to mind from the very first CD or vinyl spin. More MAIDEN references (from the “Piece Of Mind” era) can be found in “Dark Messenger” that also carries the band's personal character, while let yourself get carried away by the riff based “4000 Torches” branded by the Canadian Metal quality. The pirate-inspired “Die For Gold (Upon The Boiling Sea IV)” made miss even more the old good RUNNNIG WILD (and again questioning Rolf's decision to reactivate the band) but that stayed in mind for a couple of seconds as the galloping rhythm section got on me on board a pirate-ship fighting to defend the Jolly Roger.

The sound production is successful in keeping the band’s energy and power contained and balanced changing leading roles between the guitars and the vocals (both clean and harsh), serving perfectly the needs of each song. The best song of the album is hands-down the seven minutes long “Men Of Fortune”; from the opening riff attack to the sing-along bridge and chorus this track is epic, melodic and heavy making it a great asset for every live setlist. The keyboard-break with the almost church-like sound, the dominating bass and the spirit lifting choir-esque singing put the term Power Metal aside the album description. The harsh vocals work great here and I think give 3 INCHES OF BLOOD the space to personalize their sound by using more of them.

Yep, 3 INCHES OF BLOOD earned my interest and I think I will start working backwards and check the rest of their discography. At the same time I think this album is the best one the Canadians have released and I am sure it will widened their fan-base, since after all they deserve it. Check them out and you won’t lose!