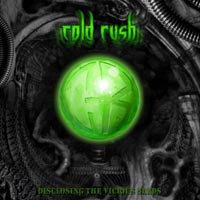 COLD RUSH is a German band, hailing from Munich. They have already a full length album under their belt entitled “The Illness” released in 2009. Their sound is a combination of Metal with harsh vocals and Electro / Industrial elements. The Industrial bands of the 90s have influenced COLD RUSH’s sound, and comparisons to their more famous compatriots RAMMSTEIN are inevitable. The later surely have influenced the band, but their sound is a lot closer to Metal, plus their lyrics are written in English.

The band had been in the studio since early 2011, recording their sophomore album “AmoKKoma”, with a new vocalist, Matthias Kupka (SUIDAKRA, EMERGENCY GATE). COLD RUSH released the digital maxi CD (although the term ‘single’ is more appropriate) “Disclosing The Vicious Seeds” as a form of an audio appetizer, containing two tracks. “Daily Crime (A Second Edition)” showcases the electro elements of the band and as it progresses as a Heavy rhythmic mid tempo track. The second track “White Z” is a lot groovier featuring cool drumming and catchy keyboards.

This is an interesting teaser by our German friends and those who like to mix their Metal with Electro elements should have this band under their radars.