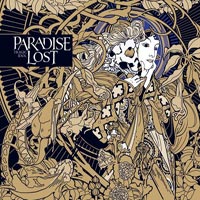 In a scene that has an abundance of bands proclaiming  to play Gothic or Doom Metal, but end up with nothing important to say, PARADISE LOST bring their thirteenth album, to actually redefine through remembrance what Gothic Metal is; a simple process of massive, melodic, monolithic sound that fills the listener with emotions, like the moment you stand at the edge of a cliff under a cloud filled sky and the angry sea below you bellows with anger and you, defiant of all stand tall the blue dark horizon mirrored in your determined eyes. Music that is powerful, music that makes your skin crawls.

PARADISE LOST created an album that will bring back memories to the old fans and show the new ones  what a great band is capable of. Of course, I believe that creativity is something that PARADISE LOST was never lacking always exploring music never bound by fear or self imposed musical limitations that other bands choose. “Tragic Idol” is a powerful album filled with songs that will remind the past, a past close to “Icon” and “Draconian Times”, and what a necessary lesson of the past this is since the gothic/doom Metal has taken a wrong turn for the worse. What better occasion for the fathers of Gothic / Doom Metal to create an album that will contain the necessary element that define this music genre.

In “Tragic idol” the songs have an aggression, unique to PARADISE LOST; there are no more slow intros; heavy and angry, riffs have taken the place of the slower intros while the drums have taken a dominant role. The band has created a musical landscape that although the atmosphere is dense the guitars play fast and edgy making this the most guitar based PARADISE LOST album. One can instantly get connected to the song as they are very personal oriented with emotions triggered through the relentless struggle and the constant war of not giving up. In every minute of the album you will discover something new that will give life to memories within you.

“Tragic Idol” manages to bring back something that was missing from the Gothic Metal scene and that was the struggle, continuous walk towards a goal that might now even be successful or worth the effort. “Tragic Idol” is the redefined gothic Metal manual that should be followed by all the bands that wish to create the dark and sharp atmosphere presented here. Even the vocals have regained that struggle you could discern in older albums. Now that I am listening the album while writing the review for the fourth time, I think this album will show its strength onstage, since the melodies are base solely in the combination of guitars and drums with the bass to add to the volume and without keys, I can only imagine the energy that will pour out to the crowd.

PARADISE LOST’s “Tragic Idol” is a focal point to the Gothic Metal scene and a great addition to the Doom genre. Listen to every song and open your soul to a darker side letting the music guide you to an inner search. “Tragic Idol” will make you bleed.