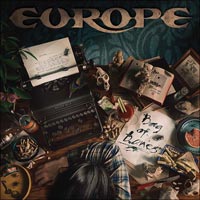 Let’s get it straight: I love the first couple of EUROPE albums, I get along well with the multi-platinum “The Final Countdown” LP, I think there’s some good rockin’ stuff on the next two discs prior to the Swedish band’s 90s spit and I find their three reunion releases in the 80s to be quite average and non-sparking. I prefer remembering this outfit as an impressive Scandinavian Hard Rock/Metal piece offering lots of nice music until ultimately cursed with having a multi-selling album that marked every other recording in their career.

The ninth studio album by these Swedish rockers sees singer Joey Tempest stating “…we've made a hardcore classic Rock record with the Blues knocking on the door (…) this almost feels like a ‘prequel’ to our very first album, with a 2012 punch”. All these years I do not take seriously what each band or artist says before a new album is released but some keywords on Tempest’s quote are matching what “Bag Of Bones” is all about anyway. The band from Upplands Väsby offers some 40 minutes of heavy bluesy low-tuned Rock with a hardhittin’ edge; the style and sound has some similarities with what guitarist John Norum has lately done in his solo works plus some connections to most recent releases from bands like WINGER or MR. BIG (sound-wise, mainly) instantly popped in mind.

Again, still, there’s little in common here with the 80s heyday of the band. Not only the production and performance looks the other way related to what the band did before they (back then) called it quits but the songs themselves seem to count mainly – if not only – to the credible personás of Tempest and Norum. The former paints the music adequately with his experience while the latter places the guitar work in the centre of the music’s outgoing profile. The result, though, stands far from being exploitive and colorful. I would not dare labeling their music as ‘just Rock’ which is not of course something to sentence EUROPE to death anyway but possibly separates once and for all the band’s two periods of career. Older fans especially should pay attention.

“Bag Of Bones” surely is no prequel to anything; it should be remembered as the album EUROPE released while going back to the roots after the modern low-tuned Hard Rock experiment of their previous CDs was over. The Rock roots, not the band’s…