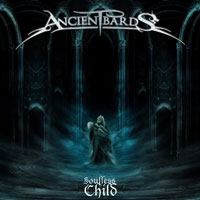 Although I don’t listen to a lot of Power Metal these days, like I used in the past, I have a thing for symphonic Power albums. This is due to the fact that I love epic and classical music. So, I just had to get my hands on the new ANCIENT BARDS album even though I wasn’t familiar with their previous “The Alliance of Kings” and “Soulless Child” that were the first parts of the “Black Crystal Sword Saga”. ANCIENT BARDS come from Italy where they were formed in 2006. After several problems with previous members, the band finally got a solid line-up and released the debut album in 2010.

“Soulless Child” is a genuine symphonic Power Metal album with some elements that did not leave me to fully enjoy it. First of all, it has great orchestrations starting with the album intro and the epic melodies or in “Dinanzi Al Flagello”, a symphonic/folk track with great chorus. The band has managed to nicely mix the typical Metal tunes, the epic orchestrations and many melodic choruses that definitely enhance the atmosphere: “To The Master Of Darkness” and the almost 15 minutes long epic “Hope Dies Last” are fine examples with mid and fast tempo. Apart from the orchestrations, the guitars and the keyboards have distinct roles, driving many times the music with leads or solos. On the other hand, the slow moments are rather indifferent, like the first half of “All That Is True” and most of “Hope Dies Last”: they are typical ballad-esque moments that are kind of typical in Power or melodic Power albums. Definitely, the highlight of the album is “Through My Veins”; a seven minute epic tune, with great melodies, beautiful orchestrations and riffs that are heavier as compared to the rest of the album. The addition of harsh/shouting male vocals accompanied by a really fast break will make you headbang like crazy.

So, what I did not enjoy in this? Well, apart from aforementioned slow parts, I didn’t quite like Squadrini’s voice. Don’t get me wrong, she has a great voice, but her vocals don’t fit to a symphonic release. Her vocals fit perfectly in those slow moments where she sounds great. Also, I couldn’t stand her higher pitches. It felt like someone was drilling a hole through my ears, a result that can only be compared to the loud and annoying feedback we get in concerts. On top of that, there were moments where the keyboards sounded like those 80’s pop music synthesizers meshing the entire atmosphere.

To sum this up I have to say “Soulless Child” is a good release. It isn’t something groundbreaking that we haven’t heard by other symphonic bands, but It has many good ideas from highly skilled musicians. I think we can expect better things from this band in the near future.