Lance King - A Moment In Chiros 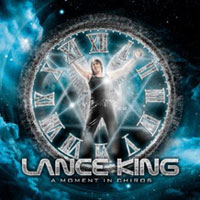 There is a bunch of great singers out there who for some reason have never remained in a single band from more than a couple of albums. Maybe it’s their goal to be solo artists so getting in a band is one more step towards recognition but on the other hand, during this process great music is being produced. And that’s what really matters to all of us, the Metal music lovers. Lance King belongs to the aforementioned group of singers and his biography has many ex- references like PYRAMAZE or BALANCE OF POWER. So, after a long singing-for-bands career Lance decided to take the next step and release a solo album that is also a concept one. Inspired by the whole 11:11 time prompt phenomena (yep, there are people who actually believe this is a special time, date... or whatever) Lance has put together a fine collection of songs that flirts with the Progressive genre while keeping both feet on the melodic Power Metal territory. I have to admit that this concept felt like Arjen Lucassen’s AYREON albums where there is long guest-list with musicians who add something of their own into the song-writing. In this case, I think all the guest additions followed Lance’s point view and hence this is not a Rock opera but a solid melodic Power Metal album.

First of all, the album is 100% successful as far as the storytelling part goes. Even without the lyrics, one can easily understand that there is a story developing behind the songs (ok, the song numbering also helps that) comprising different emotions and atmosphere making the additional auditions a necessity. What drew my attention during the first CD spin was the KAMELOT aesthetics during the album opener. The multiple vocal harmonies, the very good guitar work and the keyboard melodies in the background are the elements responsible for this reference. Especially, Lance’s multi-color singing style has many meeting points with Khan’s distinct reading making think that he could be the next KAMELOT singer. Nevertheless, the progressive layer comes with the fast shredding and most of the times maintain the complexity logistics and do not fall into the showing off DREAM THEATER tradition. Melody is on the spotlight during “Manifest Destiny” while “A Given Choice” shines through the additional KAMELOT references and the enhanced heaviness in the solid rhythm section. The production has everything into place balancing power and melody without making the music sound over-loaded and confusing. Take for example the excellent “Infinity Divine”; there is a lot going on in the complex structure and it wouldn’t be much of a surprise if an untrained listener (like me) got lost. But no; the vocal harmonies blend beautifully with the guitar work without messing the web woven by the keyboards that offend take the leading role. There is an Eastern feeling all around that I guess enhances the mystery around this 11:11 matter that seems to bother a lot lately (I didn’t notice something happening that day, did you?) and overall works absolutely great.

Yes, I am bound to close this review by being cliché; the album is recommended to the Progressive Metal fans who like SYMPHONY X or DREAM THEATER. But, it would be a shame for someone to lose the chance to dive deep in Lance King storytelling and miss the compact songs and the melodic layers that the music lies upon. If you like the late KAMELOT albums, don’t ask much and just buy this one!