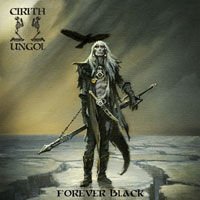 I put on my skepticism hat whenever I hear news about a band, after some reunion shows, going back to the studio. This is almost a reflex reaction considering how much a band can change during the course of two or even three decades, boiling down to the lineup chemistry that may even be nonexistent.  In the case of Ventura, California’s Heavy / Doom Metal legends CIRITH UNGOL this fails to apply, even though these guys have returned with their fifth full-length album, titled “Forever Black”, 29 years since “Paradise Lost” had seen the light of day, and it sounds like they’re at their creative peak being refreshing and, at the same time, faithful to the scripts of old school Heavy Metal.

With core members Greg Lindstrom (guitar, keyboards), Robert Garven (drums) and, of course, The Voice Tim Baker (vocals), CIRITH UNGOL have enlisted guitarist Jim Barraza and most notably bassist Jarvis Leatherby of the NIGHT DEMON fame, who was one of the driving forces to re-animate them in 2015 when original bassist Michael ‘Flint’ Vujejia was unable to follow. “Forever Black” sounds really authentic and fresh, showcasing a band that has woken up from a 3-decade slumber to roar like a bunch of thirsty, Metal-maniac teenagers. The trumpets of war start to blast with the intro “The Call” that passes the baton to the CIRITH UNGOL-y “Legions Arise” with such a catchy riff that will get stuck for days. This one unfolds into an epic Metal anthem that calls for fists in the air and/or some serious headbanging right from the start. Oh, how great is hearing The Voice again, delivering with might the opening and meaningful lyrics “long have we slumbered, but now we awake”! Tim Baker’s voice still sounds like the incarnation of pure evil; the piercing, high-pitched range is there, commanding and grandiose as well as his unique way to spit the lyrics with that characteristic tonicity that reeks CIRITH UNGOL from miles away. “The Frost Monstreme” hits the speakers in a MAIDEN-esque epic way that in some way brings to mind the Greek Rock legends SOCRATES (and the “Frost And Fire” track), and especially Yannis Spathas’ ‘70s Rock-flavored guitar sound. And for this it gives me serious goosebumps every time.

Are there any changes in the overall CIRITH UNGOL latest venture? Of course there are; the twin guitars really make a difference when compared to the ‘80s quartet line-up, as Lindstrom and Barraza deliver their stylish guitar-licks and powerful breaks, providing a meaty, true Metal sound that seems to be the basis for attracting a new generation of fans. Jarvis Leatherby brings some NIGHT DEMON-bass quality here, proving once again that this guy is a beast and passionate when he is involved in everything Heavy Metal related. The production sounds like it’s from the mid-80s and stylistically fits like hand in glove to the old fashioned collection of Metal-tinged, yet heavily ‘70s Rock-formed tracks. And for this reason, it occasionally feels like this is some CIRITH UNGOL ‘best-of’ compilation; no fillers, just all-star epic, Doomy tracks from start to finish. Listening to this album for the last couple of weeks, I can say with confidence that it’s hard to distinguish one or two tracks as the highlights, but if you’d twist my arm, I’d go with “The Fire Divine” and its THIN LIZZY-esque guitar quality, the slow and glum “Stormbringer” that must weigh 666 Metal-tons with the “I’m Alive”-like structure, and the super-groovy “Fractus Promissum” that demands to be played live, especially when the  (Dio-era) SABBATH-esque jammy guitar solo kicks one minute before the end – priceless.

With almost half a century of existence under their belt (!), CIRITH UNGOL are back with the impressive “Forever Black” to unite the old and new legions, driven by their undying love for the genre. “Forever Black” proudly states that CIRITH UNGOL totally deserve their throne as ‘legends’ anno 2020, and are ready to conquer even those who didn’t fully appreciate and / or comprehend them back in the day. Do you dare to stare straight into the blackness of Elric’s soul?

“We lead not the weak, they won't answer the call. As chaos descends, false Metal will fall!”