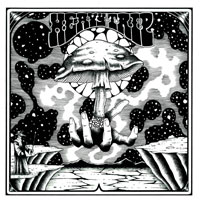 “How many dudes do you need for a heavy trip?” could easily be the opening line for a joke or a short story, and the answer is “three”, and comes in the form of British Columbia’s instrumental Stoner / Doomy Rock / Bluesy trio HEAVY TRIP that released the self-titled debut in the end of March. It is highly advisable to not skip this release once you’ve read the word ‘instrumental’; sometimes you don’t need lyrics when all the talking’s done by crushing guitars and the acid Jazzy combo of bass & drums that are the ideal companions. So, the only thing you have to do is take “Heavy Trip” for a ride and see for yourselves. Soon enough you’ll realize what a ride that was!

Nowadays, it has become a rarity for me to get impressed by a debut release delivered by a Stoner / Doom Rock band, and I will blame the overrated scene with bands popping up one after the other, like mushrooms after rain on a rich and shadowy soil. But these three HEAVY TRIP dudes must have studied really hard their Doom / Blues Rock, and therefore know how to build trippy music that doesn’t lack in quality, duration or heaviness. If you don’t believe / trust me, then the album opener “Hand Of Shroom” (what a title, huh?) will speak louder than words. The opening fuzziness and the anticipating drumming lay the perfect setting for the Bluesy guitar to figuratively melt your ears. Mr. Cole Jandrisch seems to be some kind of a strings-whisperer, holding the secret of how trippy Stoner Rock should sound – especially when there is no some Ozzy-sounding dude to ruin the entire thing. Don’t get me wrong; I love Ozzy, and even his clones, but it gets too much of the same hearing the reheated Doomy recipe over and over again throughout the years. So yes, the fact that there is no singer in HEAVY TRIP makes it even more challenging for the band to keep things interesting, leaving so much room for the guitar to do the talking / singing. Did I get any SABBATH-ian vibes during the listening session of “Hand Of Shroom”? Hell yeah, but without feeling that HEAVY TRIP copied/pasted SABBATH, not even close. The guitars walk on Bluesy territories with the bass and its Geezer moments as wingman, with the drumming bringing the whole thing together with a ‘60s / ‘70s LED ZEPPELIN flair. And speaking of ZEPPELIN, “Lunar Throne” lifts the curtain in a “Dazed And Confused” manner, before showing its Doomy teeth with the fuzzy, colossal-heavy guitar riff. The distortion is at the right level, meaning that it doesn’t saturate the overall sound and as it is accompanied by a great snare drum sound and monolithic basslines, feels like time-travel is real.

Side B contains the longest in time duration tracks of the album; “Mind Leaf” and “Treespinner”. The former feels like it’s taken from some unreleased SLEEP single (love the TROUBLE-like guitar licks scattered here and there) and the latter is a crazy jam that is transformed from an evil-sounding SABBATH tune to a galloping CLUTCH-y Blues anthem. Every track in here reeks of high-quality and craftsmanship, but especially this one shows a band that has worked its arse off to create such a rich, complex and refreshing result, without being monotonous or boring for a split-second.

Intrigued yet? Well, you should be. Sick basslines, epic guitar riffs and dope drums; that’s all the ingredients you’ll find inside “Heavy Trip”. Now is the time to tip my hat to these nice lads, and order the sweet splatter vinyl from their webpage. If that’s what a debut sounds like, I can’t even imagine how the next one could top that off. Bravo, HEAVY TRIP!