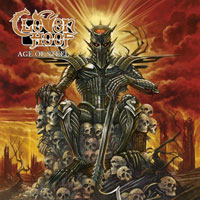 It's always scary when your favorite band releases new stuff. Not that I really doubted that CLOVEN HOOF would repeat the success of "Who Mourns For The Morning Star", but until that has fact, it can be a bit nervous.

Sure, there was nothing to worry about, and that became clear just a few seconds into "Age Of Steel". Album-opener "Bathory" signifies everything I love about CLOVEN HOOF; the up-tempo track starting after the dramatic intro holds both fines and melody. It is rock solid and George Call gets to show off his vocal range right from start. He really manages everything from clean and neat to something really forced, high and low effortlessly. "Alderley Edge" bugs me a bit; it has too much similarities with the iconic IRON MAIDEN track "Seventh Son Of A Seventh Son" - George even sounds like Bruce Dickinson in this song. Or have I gotten it completely wrong and it is a tribute?

With "Apathy", the order is restored with a very catchy chorus and some changes in pace and rhythm. The same can be said about "Touch The Rainbow"; again, very catchy and holds great melodies. What strikes me here though is that the new songs lean slightly more towards Power Metal as compared to earlier albums. Especially the double bass drum in this song sets it apart, it's more cheerful than it normally is. "Gods Of War" ends up in the same batch as well. The feel of the bass-drum and a modern-styled HELLOWEEN chorus line does the trick. It's not bad, not at all, but it steps away from the normal CLOVEN HOOF style.

Then, I prefer the sound of dark and melodic "Bedlam". I love the mid-tempo trotting and to have that break, with just vocals is absolutely fantastic. A thing like that boosts the dynamics. When having a vocalist like George, those opportunities shall be taken. The change towards the end, for a more up-tempo passage just add further to the greatness of this track. "Ascension" might not be as direct as most of the tracks are on the "Age Of Steel" album but it breaks it off, and a more complex song like this one is needed to add layers to the music. With "Victim Of The Furies", it feels like the old-school days of CLOVEN HOOF with a traditional chorus-line and a nice flow.

So, does "Age Of Steel" hold up against earlier CLOVEN HOOF releases? Even though it's only Lee Payne left in the line-up from the early days, it definitely does. The band these days is excellent which leaves very little to comment about the musical performance, and the songs are there. So, hell yes, CLOVEN HOOF rocks!

Cloven Hoof - Who Mourns For The Morning Star?