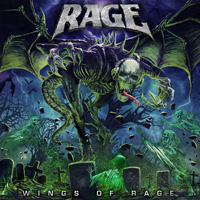 Seeing RAGE releasing two albums five years after “21”, meant one thing; the German power trio is officially back and has all the cylinders firing. Of course, it does not say much when a band is putting out albums, because the music has to be on par with the back-catalogue that in RAGE’s case is not only long, but is also a killer. I am still baffled why they have not broken the US market yet despite their history being almost four decades long (if you consider the AVENGER years too). Anyways, the meat of the matter is “Wings Of Rage” that seems to have taken more time on the making when compared to the previous two that seemed almost coming back-to-back. How did the refreshed trio do this time around?

Well, if you are familiar with Peavy’s doings, then you should have the confidence to get the album even before sampling a single piece of music. This is exactly what I did, especially after having listened how much refreshed and empowered this RAGE lineup sounds in “The Devil Strikes Again” and “Seasons Of The Black”. Yeah, Peavy decided to hit the ‘reset’ button to send RAGE back into the pre-LINGUA MORTIS days. What does that mean? Well, leaving on the side the heavy arrangements and put the focus on the Thrash Metal we started to appreciate in “Perfect Man” and eventually fell in love with the golden triplet leading all the way to “Trapped!”, I am not saying that I did not like RAGE when they started using more orchestrations, but quite the contrary. But at some point, the band’s drive and energy seemed to have been depleted reaching to the point of ‘fix it’ or ‘break it’.

The album opens with “True” that I am happy to report is the trademark RAGE fast-paced song based on a guitar riff that carries a “Trapped!” flavor. Although I hate making comparisons between new and old albums, the guitar riff in the bridge made this inevitable. And topping this off with the characteristic kind of evil singing by Peavy and the pounding rhythm, you’ve got a powerful album opener. There is mood-lifting tempo that justifies why people used the term ‘Power Metal’ when describing the music of RAGE. What I love here is the organic sound and production with the focus being on capturing the band’s energy and not having everything perfectly balanced. I mean, you can almost feel the drum kick hitting your chest as you’re getting carried away by the amazing groove of “Let Them Rest In Peace” before joining in during the oooohs part. Sweet, right? I would be a terrible liar if I didn’t say I got some “Secrets In A Weird World” goosebumps after the “Twilight Zone” legendary melody starting off “Chasing The Twilight Zone”. I know, I said no comparisons between the new and the old, but I just could not help it; it is that good. German Power Metal gets into the spotlight during “Tomorrow” and I will credit the new guys in RAGE for bringing the fresh air I was talking about in the intro. Yes, prepare to headbang hard during the album’s title track before getting an Eastern flavor from “A Nameless Grave” that should be considered as the underdog of the tracklist. This is a “slow-burner” and requires additional spins to sink in, even though the orchestral arrangements is definitely not something new here, but the way are being implement is. I mean, they work on the background building that sinister atmosphere with the focus being on the melodies and the Thrash rhythm section. The guitar solo also feels fresh as it is serves the music and not the other way around if you know what I am saying. “Shine A Light” is an amazing composition and some decades ago I would have described this as a power ballad due to the sad melodies, the catchy chorus (full on the ‘80s vibe) and the awesome bass lines that hide behind the catchiest of riffs.

I feel the need to congratulate myself for hitting the ‘play’ button without reading the press release not even the songtitles. Although, even if I had, I am sure reading the title “HTTS 2.0” would reveal absolutely nothing about this one. It took me some seconds into the song and into the first lyric lines to realize that RAGE decided to rework “Higher Than The Sky” and overwhelm my mind with memories when I was sung my lungs to oblivion during the “End Of All Days” tour. How I love it when music wakes great memories, and I have to thank Peavy for this. But “HTTS 2.0” is not a simple re-recording of the original; it has been reworked bring in some new riffs that, especially during the bridge, work like magic to the point that only the chorus points to “Higher Than The Sky”. Isn’t it a bit heavier / faster too?

RAGE was part of my teenage years and therefore is extremely close to my heart. I am glad to report that this band is still inside my heart but not in a “remember the old days” way. Peavy, Marcos and Vassilis have put together an amazing album that is the best of the three following the turmoil and the total lineup makeover. Can we please put RAGE on a plane and get them to North US?

Rage - Seasons Of The Black