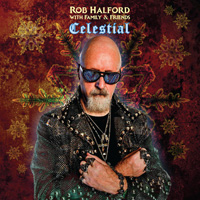 No matter how “open-minded” metalheads like to call themselves, the truth is that the majority does not like to see lots of changes in their favorite music, or bands. With that in mind, you should be able to understand how heavy balls a Metal musician has to figuratively have, to go all in with a Xmas album. Well, I cannot think many of that kind, but Rob Halford definitely stands on top of such list. He is probably the boldest of them all and practically can get away with anything, and this is a hard-earned privilege. I mean, I cannot imagine how tough was it for him to announce his departure from PRIEST and release non-Metal music with TWO. With these in mind, I was excited to hear his second take on Xmas songs (after 2009’s “Winter Songs”) already aware that whatever has Rob’s voice in has the potential to be awesome. So, is “Celestial” a good idea to have it wrapped under the Xmas tree?

The answer to the latter question is a confident ‘yes’ because after the fitting and a bit cheesy intro with some hohoho, comes the PRIEST-like guitars of “Donner And Blitzen”. That’s right; the groove will get you into Holidays mood with some good ol’ headbanging topped off by Rob’s high-pitched singing that add Metal in everything with his voice in. Seriously, this is great Metal-in-your-face track, if you are willing to pay less attention to the lyrics. On the other hand, I would switch all these songs streaming in stores this season with this one any time of the day. I guarantee you will be screaming “Donner and Blitzen” with your fist in the air, even before the first listening has ended. Basically, this is how “Celestial” flows, delivering some well-known traditional tunes with a Metal twist. I mean, having a cow bell and a shredding solo in “God Rest Ye Merry Gentlemen” or enjoying the pounding rhythm in “Deck The Halls” – with the appropriate faster tempo and ‘aggressive’ falala lala – before turning the speaker towards that neighbor who thinks everybody should listen to his celebratory music selection with Rob’s edition of “Joy To The Word” will definitely bring joy to your world. The album also has some power ballads like the Blues-y “Away In A Manger” or the kind of too cheesy for me “The First Noel” but again, Rob can get away with anything. Probably the title of the ‘total makeover’ goes to the in-your-face “Hark! The Herald Angels Sing” and I challenge you check some regular version to see how much this song has been metalized. The opening chords will give you a better buzz than the strongest eggnog out there. Hands-down, the most interesting song is the experimental in a LED ZEPPELIN way “Good King Wenceslas” that is a 7 and a half minutes long. Oh my, the flavors found in this song will make your jaw drop and for a moment forget the festive mood of this release.

There you have it; Rob’s second offering to make the holiday’s season go less painful as far as the music blasting everywhere go is concerned. At least, with “Celestial” spinning non one can blame you for not being in the proper mood. And one more thing; Rob Halford is the one and only Metal God!