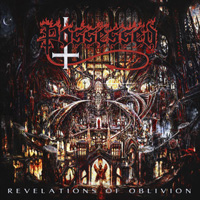 The last time POSSESSED released a full length album was 33 years ago and I am sure no one was expecting to get anything new from the legendary frontman Jeff Becerra despite the live shows that have been happening since 2008. These days, skepticism is humanity’s top reaction and it seems looking things through the ‘negativity’ filter is more appealing than anything else. Although, seeing quite a lot of bands “getting back together” for a couple of shows performing an entire album has become the lifeline for a specific Metal scene that unfortunately runs on nostalgia and in some cases on hype. With all this in mind, it is kind of expected to approach “Revelations Of Oblivion” with caution being extremely careful not to get super-excited before the needle has hit the wax.

On the other hand, and this happened to me, controlling my expectations made me enjoy the album 666 times even more… because I did not have my mind dialed in to expect a “Seven Churches” sequel. Hell, I did not appreciate Death Metal when that album was released (my ears were too young for that aggression). As it is fit, the album starts with an introduction with church bells tolling and some sort of incantation that lets the POSSESSED spirit possess your ears (I could not escape this pun). So, the way the live shows will start has been set, and I think “No More Room In Hell” is the best way to get rid of all your reservations. Yeah, Jeff starts his preaching with his trademark Death Metal vocals and his rather rare singing pronunciation that lets you understand the lyrics. It may sound strange to some but lyrics are an important element for your listening pleasure and I will expand on that. I love the drum rolls and the nice echo effect on the guitar solo that – yes – sounds vintage-y or ‘80s-ish if you prefer (do I hear some early SLAYER on the tremolo action?). Speaking of guitar action, you’ve got to love the riff of “Dominion” and how Jeff has lowered his singing pitch a bit to enhance the evilness that is POSSESSED trademark. What I was talking about the lyrics is showcased in the skin-crawling “Damned” where the vocals compete the guitars / drums regarding which is the most aggressive. I mean, “no hope for the future / no hope for the past / nothing is forever / nothing ever lasts” is bound to sends shivers down your spine, right? To my mind, this is the definition of POSSESSED and to some extent of the Death Metal I came to know some decades ago.

The slightly slower and kind of groovy “Omen” is an immediate favorite following the coming of – you know who – and I cannot resist quoting once more Jeff who is singing: “my hell is here / my hell is good”. Honestly, I missed this type of Death Metal and I am happy to see my interest being rekindled with such an impressive return. Oh my goodness, the riffs in “The Word”, the headbanging rhythm and the melodic vocal lines make this one is the underdog of the album only because it comes rather late in the tracklist.

No matter if you try your hardest, you will fail to find a weak link “Revelations Of Oblivion”. Every song is concert-worthy and even though it took 33 years to rise up from the pits of Hell, it carries the POSSESSED logo with pride. Damn, the rhythm guitars on “Graven” will make the hair on the back of your neck to stand up before getting into some serious headbanging (warming up before this is highly recommended). Ok, “Revelations Of Oblivion” is fantastic; can we please get a full North US tour?

Six, six, six on the head and the wrist
The bloodied, battered crucifix
Two coins to cross the river Styx
On bended knees and Satan's fist