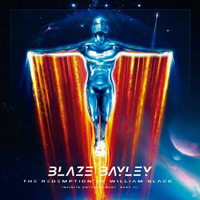 Blaze Bayley is a unique performer and it is such a shame that received so much negativity during this time in MAIDEN. There are always two sides in every coin and in this case, Blaze got to start his solo career after leaving the British band. How things went from that day up until now is a real rollercoaster with lots of downs and, fortunately more ups, especially the positivity this gentleman and his loyal band have received with the release of the impressive “Infinite Entanglement” trilogy. That’s right; the band invested a decent amount of time and following an already announced (and tight) timetable, released one part per year, leaving “The Redemption Of William Black” to be the final chapter of the story. This leaves me with a bittersweet taste because, following the band’s doings to fulfill this obligation since 2016, it feels like both the musicians and the fans saw this through the end.

This may be the reason why I waited this long to put my thoughts together about “The Redemption Of William Black”; I mean, it felt like closing the chapter for good and, in hindsight, I definitely enjoyed the chase but I wouldn’t say that it is better than the catch. You see, this is another solid album by Blaze and these amazing musicians he has working with, because the album goes through a wide range of emotions, has a boatload of singing-along riffs and, from-start-to-finish has worthy-to-play-live songs. I mean, it is child’s play to figure out that “Redeemer” is the perfect building-the-tension song and therefore, a powerful setlist opener. The spoken parts remind the listener that this is a concept album before letting the trademark BLAZE BAYLEY riffs and vocals to take over. Sure, the atmosphere does not feel hopeful although the in-your-face guitar action is the right recipe to headbang like there’s no tomorrow. In case you are still wondering if this band can write chant-along-worthy songs, then I suggest listening to “Are You Here” and “The First True Sign” as loud as your set-up allows to. The latter is also a great representation of how much emotion Blaze puts in his singing but you may need to see the band live to really get what I am saying. Or maybe, have a closer listen to “Human Eyes” to see how the minor clean guitar chords work with Blaze’s emotionally intense singing. It is perfectly fine if you are moved by this, because, my friends, metalheads also have a beating heart… Hang in there, because the guitar distortion and the faster tempo will give you the relief you were craving for.

You can also keep listening, as “Prayers Of Light” has the right groove to get you out of the darkness and, on top of this, lift your spirit and your fist in the air with the “now we stand and fight” lyric part. As the album goes deeper into the story, the epic elements step forward starting off with the amazing “18 Days” where the female guest-singing by Liz Owen works like a charm. The double guitar action in “Already, Won” takes the listener all the way to the epic finale, which you should be sensing, it is steadily approaching. After all, the album is following a story and hence, it has to have a powerful ending. This starts with the amazing “Life Goes On” although I should say that the lyrics are more ‘real-life” than they are story-oriented. The lyrics carry a strong message and for sure, it is not only for William Black’s ears. Once again, the lead guitars are the winning ace in Blaze’s sleeve, making this song one of my favorites of the album. Well, I could easily add “The Dark Side Of Black” on the favs list because the ooohs part is too sweet to ignore but the album closer is so good that it kind of destroys all competition. Starting off with some narration, the song sets the proper atmosphere to close this epic trilogy story. The clean guitar arpeggios slowly step into the back, leaving the distortion to lay down another hum-along melody. Blaze starts low and mellow only to underline the tension that finds its way through the galloping rhythm. Oh yeah, it is headbanging time and singing-loud is totally recommended. The riffs are impossible to ignore while the bass-led break is the perfect vehicle for more emotional singing by Blaze as he is climaxing his performance with the powerful line “they will never break us if our spirit is strong” lyrics.

This is an amazing conclusion to the trilogy that was made to turn the tables for Blaze. After all this years and after all this hard work, he and his band can enjoy a solid support from a strong fanbase that has the eyes and ears to see what the band BLAZE BAYLEY can deliver both on and off stage. By the way, the deluxe edition that can host the three vinyls is absolutely stunning. Thank you, Blaze!