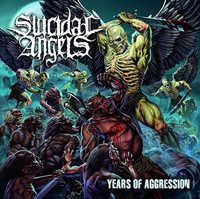 Thrash from Europe and especially from Greece? Count me in, although I would be a terrible liar if I’d say that I did not know of SUICIDAL ANGELS before getting my hands on their seventh LP, “Years Of Aggression”. Their German-infused Thrash has never stopped being appealing to me and therefore the Greek band has been on my radar for quite some time now. Still, having listened to the album more than enough to form an opinion, I can say from the beginning that SUICIDAL ANGELS seem to have some fresh and high-octane fuel in their tank. Please, allow me to explain why.

The album starts with “Endless War” that checks all the boxes of snare-drum driven Thrash. Yeah, the galloping rhythm that leads to the double bass drumming during the chorus will quickly make your blood boil. Oh my goodness, the fat rhythm guitars part, combined with the killer bass sound, build the right amount of tension to start a circle-pit, no questions asked. The guitars seem to have taken a step forward in the mix and, combined with the crystal clear production, create the perfect Thrash storm. Checking the guitar solo helps me to better understand what Nick said in the recent interview with METAL KAOZ, about Gus’ contribution on the leads, so keep your ears pealed to get what I am saying. The riffs in “Born Of Hate” breath some melodic Death Metal air coming from Sweden. I will use the word ‘melody’ here, knowing that this may sound like a bad idea because Thrash and melody do not mix… If you believe this, then I suggest cracking the volume up during this song and see how your body will react to the high-octane riff assault, especially during the solo. In fact, it is quite challenging to choose where to guide your listening attention because the riffs / snare-drum and the solo are both frickin’ killers. So yeah, SUICIDAL ANGELS have stirred things up a bit without taking their foot off the Thrash territory where they were formed and forged some years ago.

Greeks, as you may be aware of, have a distinct English pronunciation (I am not immune to this either) and in the case of SUICIDAL ANGELS this works in favor, forming the band’s easily recognized sound. The album’s title track is the perfect example of this and you can pay more attention to the way Nick is growling the lyrics in this solid headbanger (damn, the rhythm part is a neck-snapper). Come to think of it, instead of mentioning the Swedish Melodic Death Metal, I could easily get away with using the latest KREATOR albums, where the focus on creating catchy riffs has definitely been heightened by the Germans. The 6-second shy of three minutes “D.I.V.A.” brings early SLAYER to mind through the opening riffs and guitar distortion and you may as well think of DESTRUCTION as a reference and still be right on the money. No matter what, the energy surge coming from the album is unique and just perfect for having some violent-fun in-concert. By the way, “you nameless piece of shit, spineless you crawl” is some powerful statement that goes hand-in-hand with songs vein-popping intensity. Even though I chose the aforementioned lyric line, it sounds like there is some interesting writing here but I will have to wait until I get the vinyl copy and see what Nick had in mind. For example, the lyrics on the mid-tempo and hard-hitting “Order Of Death” were inspired by a poem where Death has a crosstalk with a prisoner on death row, and that sounds like a Thrash theme, right?

After getting through the easy-to-pick Thrashers, my interest was drawn towards the album closer “The Sacred Dane With Chaos” at first due to its time duration. You see, it is not typical to see Thrash songs passing the four-minute mark, and in this case, the seven minutes are enough to hint that there is something interesting here. And I was not wrong; the song starts with a nice mid-tempo rhythm and a bit of a dark atmosphere before letting the clean guitars take over somewhere in the middle. This is not a happy break but leads to some almost Eastern-sounding riffs, letting the tension to break out. Can this be included in upcoming setlists? Oh man, I hope it will.

Color me impressed because SUICIDAL ANGELS have created a killer album that even though makes use of the term “melodic”, it does not lack of the type of Thrash intensity you have used getting from their albums. If I was to make a prediction, I would say that this album may be the perfect reason for the Greeks to cross the Atlantic and add North America on their touring plans.