Bible Of The Devil - Feel It 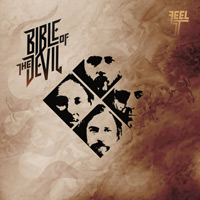 Usually, one’s relation with a band starts with a song and/or an album, with a concert sealing the deal. With Chicago’s BIBLE OF THE DEVIL my relation started from the end, and for this reason, became a solid one. Ok, the band was not known to me before that as I had purchased the “Freedom Metal” album when I was living on the other side of the Atlantic, being totally oblivious of how things with BIBLE OF THE DEVIL would evolve. Fast forward one decade later, I am happy to say that I have seen BIBLE OF THE DEVIL way more times than I had spun any of their albums, and now, I am excited to report that “Feel It” arrived to change this.

First of all, this album has been on the making for a significant amount of time with quite a few songs having been already played on one of those BIBLE OF THE DEVIL concerts I have attended. In fact, I am sure I have butchered a couple of song-titles in some live reports but I don’t think I could have done any better... Yeah, the double guitar action of the instrumental/intro “The Light” sounds absolutely familiar to the point that brings to mind the band, getting ready to storm the stage. That’s right; even if this is a studio effort, “Feel It” has captured the sweat-soaked performance these guys deliver each and every time. So, right off the bat, I have to tip my hat to Sanford Parker for producing and mixing the album in a way that does not fall far from the ‘playing live tree’. “Ride Steel” sounds amazing, and especially the way the volume of the guitars increases give the impression that Nathan Perry is turning up the nob on his guitar to get the show going. The mix is equally fantastic with the bass-guitar having a voice of its own, something I consider extremely crucial for this Hard Rock-infused-Heavy Metal the Chicagoan band plays with confidence. You can think of THIN LIZZY, KISS (early), DEF LEPPARD (also early) with a hearty dose of NWOBHM guitars, if you’d like to put in few words what BIBLE OF THE DEVIL are up and about. The thread that connects all the songs together, is the party-mood that steps on the limelight with a shirtless determination to rock your socks off, starting off the festivities with the dancing-along “(Love At) The Speed Of Night”. Yes, this one is the definition of rocking out on a summer Friday night, boogeying its away with the sticky-like-superglue groove led by the double-guitar action and the sweet snare-drumming courtesy of the constantly-smiling-drummer Greg Spalding. The KISS aura, takes a step forward during the classic Hard Rock tune “Lifeline” (do I hear some Paul Stanley on the vocals? You bet I do) and then, let “Idle Time” to take you down the nostalgia lane with an almost SAXON mid-tempo vibe (again early) before switching to THIN LIZZY (I guess this where the nostalgia comes from). It is impressive how many different references come to mind but not in a ‘trying to sound like’ way; no, BIBLE OF THE DEVIL have their own identity that has gotten - figuratively - flesh and bones after spending so many hours on the stage. In the same vein, but with a faster tempo, is the hard rockin’ “Iron Ego” that sounds like a powerful candidate for future setlists being perfect for somewhere in the middle of the set to keep the audience’s energy high.

Even though I have listened to the album way more times that I needed to form a solid opinion, I did not find myself in a ‘skip this song’ situation. Every song has something different to offer and in the end of the day, the entire album feels like a live setlist starting strong, slowing only for a bit before dropping the curtain with a bang through the slow-start of “Ultra Boys” that soon evolves in another foot-taping, fist-pumping rocker. I love how the intro reminds me of SAXON’s “The Eagle Has Landed” before getting all cocky and borderline Glam Metal-esque during the chorus. And speaking of live shows, I can definitely see this one closing the show with some nice and loud chanting (aka ooohs) by the BIBLE OF THE DEVIL fans. My prediction (with a high level of confidence) is that you will definitely feel it the moment the needle will drop on “Feel It” and this pun was absolutely intended... Of course, I have already ordered the vinyl...

The Skull @ Reggies, Chicago (US)