Overkill - The Wings Of War 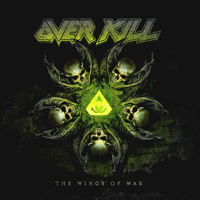 There is no point to pretend being unprepared for a new OVERKILL album and, really, you don’t have to be a scholar of their discography to know how explosive these NJ boys are. If you still have doubts (shame on you) then going to show with OVERKILL on the billing will be more than enough to put your mind at the right place. So, before spinning “The Wings Of War” I was only curious to see how this lineup would blow my eardrums of and how fast will my blood start to boil. It did not take long and I cannot think any OVERKILL album being a sow-burner to be perfectly honest.

I am sure you will get some “Necroshine” goosebumps during the electronic sounds that start the Thrash festivities with “Last Man Standing”. I can already picture uncle Bobby standing on the side of the stage like a well-trained runner ready to hit the tartan track at maximum speed. That’s right, I bet an arm and a leg that this song will be the first of the many blows during OVERKILL’s ongoing tour (I will not checked their current setlist before attending a show). Musically, this song has the name OVERKILL written in bold black and green letters with a slow build-up that explodes soon after the guitars have entered. You can imagine and steamroller gaining momentum and then reaching the maximum velocity under Bobby’ screeching singing. Oh boy, the double bass drumming along with the guitar leads are perfect for mosh-pitting while the anthemic riffs are suitable for chanting along with fists in the air. This music was written to be played loud and preferably live so you can start sweating with the band as the energy levels hit the red zone. I know, that seasoned musicians can fairly easy write songs suitable to the band’s history and sound but putting this amount of energy is extremely difficult and (sadly) rare. The Punk attitude is still there and shows its sharp teeth through the explosive mix that has the bass at the proper level to do justice of the trademark DD Verni sound. Pay close attention how the bass hits you straight to the heart during the mid-tempo break of “Believe In The Fight” and how Bobby is grunting the lyrics like he is ready take up any fight. That in-your-face attitude gets meaner during the riff-based intro of “Head Of A Pin” that soon enough speeds things up and I think primes the way for the ‘don’t get in my way’/ ‘will cut you down’ declaration of “Bat Shit Crazy”. The song that got me hitting the replay button even before completing the first album spin is “Distortion” that just happens to be another setlist-starter although it is not that fast from the get-go. However, it is a perfect tension creator from the clean guitar arpeggios in the beginning to the shivers-down-your-spine double guitar harmonies that sound awesome for mosh-pit warming up.

The DD-characteristic bass action gets on the spotlight during the up-tempo “A Mother's Prayer” that makes a sick pairing with the full of Punk attitude “Welcome To The Garden State” that could easily be granted as the official anthem for New Jersey. Take note of what Bobby is saying and make sure you won’t argue with him what it the best State... Damn, I have no idea how OVERKILL manage to sound this fresh and are able to make any young band run hard(er) for the money any time of the day and at any State and Continent. Even if you have a different zip code I am sure you will find yourself singing about “the Jersey pride” and “best place in the US” at no time.

It is impossible to find the weakest link on this titanium-solid Thrash chain with the worst songs (good luck trying to find any) being good enough to make entire albums to blush out of shame. The evil intro of “Where Few Dare To Walk” will crawl under your skin and the only way to heal yourself is to headbang like there’s no tomorrow. The way the bass changes leading roles with the guitars is to-die-for and something that is a recurring theme throughout the album. Yeah, OVERKILL have a unique writing style where aggression meets melody with everything in between and being wrapped inside the band’s thirsty to give everything from the stage.

I do not know these guys are able to keep this up releasing albums that remain in a shockingly high quality level for this long, but I will pray to every possible god that they will never stop doing so. After having seeing OVERKILL lots of times live, I can say with confidence that no matter the miles this machine has on, does not know what tear and wear means.

Overkill @ The Rave, Milwaukee (US)