Flotsam And Jetsam - The End Of Chaos 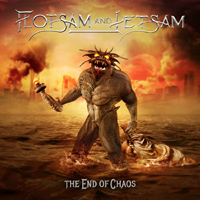 Seeing FLOTSAM AND JETSAM redefining themselves with the self-titled album release some three years ago was not enough to convince my old-school mind that these guys had some fresh fuel in their tanks. What sealed the deal for me was watching the band from Phoenix ripping it up onstage like it was the ‘80s all over again a few months later. Sure, I may be exaggerating a little bit but when you see a band more than three decades old having that drive onstage then going over the top with your statements is perfectly OK. “The End Of Chaos” is the second album after hitting the ‘reset’ button and, man, I did not see that coming...

I mean, this lineup did not stand still and decided to push a little bit farther the envelope and create some catchy Thrasher of an album that would be ideal for moshing and definitely for headbanging. The guitars step on the limelight pushing hard as they open the album with “Prisoner Of Time” showing some razor cutting riffs before that evil bass line changes a bit the tempo. Despite the slowing-down part, the heaviness stays there as Eric proves once more that his voice is getting better with age. Damn, this is a killer one and I love how the mix has left room for the bass to build a massive rhythm section with the abundance of double bass drumming. The ‘catchy’ part shows its face in all its glory during the chorus that is bound to make you sing or at least hum along even after the first spins. It is amazing to see a band of this caliber making small adjustments on the song-writing without dismissing the elements that have their name written with bold letters. I mean, if “Control” does not sound like FLOTSAM AND JETSAM then your Thrash education must have been left incomplete. The double guitar action serves the snare-drum driven part and also the chorus that just happens to be another singing-along moment. Make note to pay attention to the classic MAIDEN-esque riff action before the solo to really appreciate what FLOTSAM AND JETSAM have done in this solid album. “Prepare For Chaos” became an immediate favorite through the mid-tempo galloping rhythm and multi-layered vocals that maintain the connection with the FLOTSAM AND JETSAM of the early days. That’s right, the thread that connects all the albums from the mid-‘80s all the way to this day is still intact and this is another badge of honor this album should wear with pride.  Hinting that the end of chaos will happen with some short of Armageddon (ok, the album’s cover artwork does not hint but rather states this) you can find a dark twist in almost every corner of this album with songs like “Architects Of Hate” and “Survive” making the future seem as bleak as possible.

Eric’s vocals are the first thing one will notice during the first listening sessions but spin after spin the guitars and - last but not least - the rhythm section prove why they are worth their weight in gold. And trust me, that weight pushes the Thrash scales to the red with songs like “Snake Eye”, “Good Or Bad” and the amazing “The End” that closes the album with an intro that carries an evil DESTRUCTION-esque set of balls. Wait until the chorus to feel the need to (once more) sing-along before tasting some bizarre sadness as Eric sings: “I can see the end is taking over and it always brings me down”. ‘A-m-a-z-i-n-g’ is the only word that comes to mind each and every time I finish listening to this album and then (of course) I flip the record once more.

Is this album recommended? I am glad you asked but wait a minute... Haven’t I convinced you already? FLOTSAM AND JETSAM are not just back; they just have all cylinders firing at full capacity and “The End Of Chaos” is a powerful Thrash statement to go with.

Hammerfall @ The Forge, Joliet (US)

Flotsam And Jetsam @ Reggies, Chicago (US)