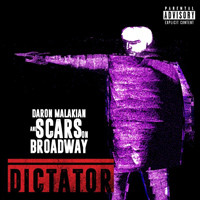 Some decades ago hosting an album presentation of non-traditional Metal album on a Metal webzine would have been an anathema despite the fact that we, metalheads, like to believe that we are free from discrimination being opened minded. Yeah right, I cannot even attempt to count the instances when metalheads were bashing a band for deviating from their sound... Anyhoo, METAL KAOZ does not belong to any category and pretty much hosts whatever feels heavy enough. However, in the case of Daron Malakian, things are heavier than one would be expecting, considering his involvement in SYSTEM OF A DOWN. By the way, the latter band was granted “access” into the Metal community and I believe SLAYER helped in that by taking them on the road with them some ages ago. “Dictator” is Daron’s second album under the SCARS ON BROADWAY moniker, and if I believe the information I found online, the music was supposed to be for SYSTEM OF A DOWN but the singer/guitarist did not see eye to eye with the other gentlemen. So, one decade since “Scars On Broadway”, Daron dropped another solid piece of strong music with stronger lyrics.

The guitar groove of “Lives” leaves absolutely no space to doubt that this is the trademark SYSTEM OF A DOWN sound after being filtered through Daron’s songwriting hands. His vocals are soaked in irony, cynicism, and aggression with a scoop of disappointment about the world we’re living. You may even call it a slap on the face of this society governed by corrupted politicians and driven by money and “fame”. Really, you’ll be missing half of this album’s value if you ignore what Daron is singing about. But that’s not all, because the talented musician has a distinct sense of melody and has put together something sticky as superglue tunes that step on the limelight in “Lives”. It will take just this song’s first chorus to get you singing along and this will be (hopefully) the hook to capture your mind and think about the lyrics too. It is awesome to listen to some strange, at first, songs like “Angry Guru” where you can cut the irony in the vocals with a knife before enjoying the groovy break before its end. Speaking of lyrics, I am sure that the album’s title track is strong enough to fuel online arguments where people are just forcing their opinions to others having totally forgot what having a productive discussion means. That’s right; long gone are the days of presenting your case, be open to debate and productively bring the discussion into a meaningful outcome that would benefit both parties. And politics are following the same drum beat, luring and leading people to some bizarre and often ancient “ideas”. Talking about this album will definitely activate the thinking part of your brain and it is absolutely ok (and normal) to disagree. In fact, I don’t believe that Daron’s intentions are to argue or force-feed his point of views but to trigger discussions and maybe shock a couple of brains to start thinking again.

One of the most SYSTEM OF A DOWN songs is the amazing “Guns Are Loaded” where the clean guitar intro will definitely trigger some “Toxicity” memories. One again, the vocal melodies are fantastic and the way they guide the listener to the climax will get your blood boiling pretty fast. The guitar distortion will sound the charge and even though the tempo does not hit the red zone, the power is there along with the Eastern flair in the vocal lines that carry some strange nostalgia. There are some keyboards and in cases bizarre electronic melodies that come as strange during the first album spins but soon enough they do grow in you and making you want to hum along. “Never Forget” is the prefect example for this and it is extremely interesting to watch your appetite growing for this each time. “We Won’t Obey” puts the snare-drum beat on the spotlight and primes the way for the equally fast “Sickening Wars” where the lyrics match the music’s aggression like a tailored suit.

I believe I speak for the majority out there when I say that during my childhood days I hated the music my parents were listening to. For a big chunk of it I still do (although “hate” is too strong to use, especially for music) but there are some cases where I have grown a different type of appreciation. Daron hits a nerve like this with his instrumental cover on Stamatis Kokotas’ “Gie Mou” delivering the main melody with some sweet lead guitar action and the right amount of nostalgia approaching the original with gravitas. The album closes with another cover and this time Daron has completed revamped the original that belongs to electro-industrial band SKINNY PUPPY. Yes, “Assimilate” sounds rawer and with the right amount of aggression that is found everywhere in the album.

I have enjoyed spinning the vinyl more than the above writing reveals, and I am sure I will be revisiting this album in the future. In fact, I am trying to hunt the first SCARS ON BROADWAY on vinyl because that is also a killer album. Would I prefer to see SYSTEM OF A DOWN to go back in the studio? Hmm, I am not sure if I would like to mess with the taste “Dictator” had left. Anyways, that’s not the point here, so do yourself a favor and check this out.