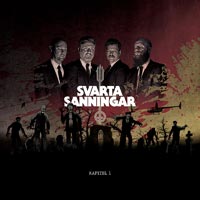 The mellow beat which starts off SVARTA SANNINGAR's debut EP “Kapitel 1” has that character that lures you in and draws you into the beat. It's dreamy, melancholic and melodic with a touch of post-Punk and Rock to keep it filthy. I do think the reason why Punk comes to mind lies more in the face that everything is sung in Swedish rather than the style itself though. Musically, this matches the moniker set as SVARTA SANNINGAR as the gloom overshadows the whole EP.

Both opening “Pentagrammet” (The Pentagram) and “Demonen” (The Demon) holds the same elements however the latter of the two has greater dynamics. The atmospheric and floating chorus creates a good contrast towards very open verses. I have to say that the second half of “Kapitel 1” appeals to me more though. Style-wise both “Experimentet” (The Experiment) and especially “Nekromantik” (Necromantics) takes a step towards the PARADISE LOST sound from around the shift of the millennium. The nerve in Klas Bohlin’s voice comes through better with a more massive background. It's also a matter of taste. I normally don't listen very much to Goth-influenced music. And perhaps it is the members’ reference to BESECH that set my mind in the wrong direction.

I do like the atmospheric feel and soft touch in SVARTA SANNINGAR's music. Though the vocals are very melodic there are rough edges which add to the vibrancy. And I think this is the key, there are dynamics and life in the music. It doesn't have that modern precision which kills most all emotions in the music. The sound on “Kapitel 1” is still full though, a good start for a new band.