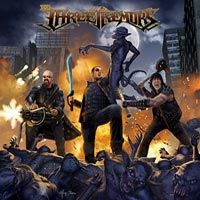 It is a bit rare to find a metalhead who has never heard the band name THE THREE TREMORS despite the fact that this never became reality... until now. It is also rare to come across a metalhead who does not have a strong opinion on who deserves to be part of the three. On the other side of the spectrum, there are some of us who like to play this game of creating all-start lineups with the naïve intention to create a mix of styles from the bands those musician picks come from. In fact, back in the free-from-internet days, putting together such lineups was a fan pastime activity. With this in mind, I was super excited when I read the news that the project THE THREE TREMORS would happen after all these years of being almost an urban legend. Yes, three of the best screamers in Metal decided to join forces and make this happen by releasing a hearty 12-track LP, full of originals.

Usually such all-start lineups do not manage to meet the expectations created by the rich bios, and the reason is kind of simple; there is no consistency between the participants and each one is called to play a specific role, something that boils down to record your part and call it a day. In this case, aside from the three singers, THE THREE TREMORS are backed by the CAGE lineup and this makes sense in many levels. I mean, skipping the part of getting to know how the musicians work inside the recording booth equals to having consistent music making, and considering that in general Sean’s voice shares lots of similarities with the voice of the other two gentlemen means an album with a clear character without sounding like a collection of songs. Really, “The Three Tremors” sounds like the product of a collective effort with a distinct musical direction and character. One more element working towards the same direction is that the songs are not built on the voice of the singer who is doing the leads. No, the three voices are being almost equally mixed expanding the musical boundaries that eventually touch upon JUDAS PRIEST, JAG PANZER and, of course, CAGE. You can see that these guys knew exactly what they were doing in the studio with the fast-tempo opener “Invaders From The Sky” that proves how similar and at the same time how different are the three voices. Ripper attacks the screams with his trademark harshness, Sean has this amazing melodic side, while Harry supports his epic character that I love to hear in JAG PANZER. Is it possible to mix the three singers in one song? You bet it is, and I have to give the proper credit to the song-writing hands of Sean Peck and Dave Garcia. The guitar parts are absolutely awesome and it would have been unfair to judge this album solely based on the vocals. Again, this circles back to what I said about THE THREE TREMORS sounding like a regular band and not like a bunch of guests. Dive headfirst into the massive rhythm section of “Bullets From The Damned” and then feel how the tension is being built through the slow-starting “When The Last Scream Fades Away” and be ready to hit the mosh-pit following the main riff. I love the mix of the three voices in an almost dialogue way, painting with different colors each song part. The absolutely favorite from the dozen quickly became “The Cause” and it was the lead guitars that got me hooked. And then the vocals come to point out how similar and how different the three singers sound. Turn the volume up during the chorus and challenge yourself not to sing along or maybe hum along because the pitch is not for us the mortals… “King Of The Monsters” makes me think of the early days of JAG PANZER and I will blame again the epic-sounding riffs and - as expected - Tyrant’s distinct wailing singing. The almost Hard Rock tempo of “Sonic Suicide” showcases Sean’s melodic side without dismissing and in-your-face attitude which come to think of it is all around the album. The fast “Lust Of The Blade” will challenge your vocal chord as it hits those high pitches you’d never thought would exist in a singer’s musical score…

If it was up to me, I may have used a different band name, only to avoid all the unnecessary (online) drama arguing who should and who should not be part of this project. On the other hand, THE THREE TREMORS should not be considered as another run of the mill gather-of-guests for all the reasons I have analyzed above. However, if you are willing to waste your time arguing, then you will be missing a killer album that I hope will have a follow-up. Until then, playing it on ten!

The Three Tremors @ The Forge, Joliet (US)