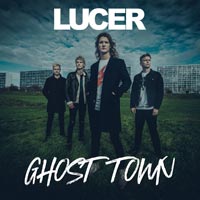 “Indestructible”, which kicks off Danish LUCER's second full length album “Ghost Town”, mixes the D.A.D. kind of quite odd structure and hitty melodies with a Pop-music production. On the record, there are layer after layer, loops and keyboards, precise and clean and hold basically everything I hate with modern music. Still, it tickles my nerves and I press 'repeat' when the album is done. The main reason for this is titled “Ghost Town”, not meaning the album in its entirety, but the title-track; a Reggae kind of a rhythm and a sticky melody. To contribute further, bassist / vocalist Lasse has a special way of phrasing the vocal lines, his tone is quite short but it all in combination makes it unique.

Based on the start of “Crazy”, it could equally well be something coming from a House DJ, but the sparse verse towards the smooth bridge and catchy chorus boost my frustration further, thinking "I shouldn't really like this". The structures, pace and rhythms don't really comply to what I remember from the live-shows I've seen this band. The party Rock 'n' Roll isn't really there - at least, not in the way I perceived it. But I guess the key here, regardless if I like the parameters put together or not, is the Rock that LUCER deliver is extremely well done and the performance is close to perfection. And if the music holds high quality and a sticky chorus, it will work regardless of style.

LUCER work for me; it's impossible to not like a song like “The Night the Music Died”, with a different production it could easily have been one of the '80s mega hits. The many layers put it a little off though but it sure sounds cool and again it sets a special feel to it. “Party Like A Rockstar” is just as off thinking of the arrangement. It starts just as expected, a storytelling kind of verse but the chorus is taken town in pace which makes it dark and moody; a mismatch that becomes a perfect hit.

The things I like on LUCER's “Ghost Town” album I really like, while other things are passing by without further notice. But that still is quite sensational since this style of modern Rock is nothing I normally would listen to. Ballad-y “Killer” is another good one. The acoustic guitar works well and creates a contrast towards the other songs on “Ghost Town” as well as the chorus within the song. So, to repeat myself: there's a lot of interesting things going on in the Danish scene nowadays and LUCER is certainly one of those things.