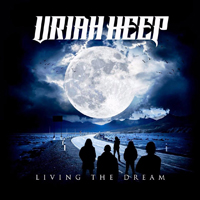 If you’d ask me, I would tell you that URIAH HEEP should definitely have been part of the original four, along with BLACK SABBATH, DEEP PURPLE and LED ZEPPELIN. They have added yet another element with their sombre melancholy and dynamics to that foundation. Their heritage holds a very consistent high standard and they’ve kept going strong over the years. Live, URIAH HEEP have always blown me away and, especially in recent years, they’ve killed all competition when it comes to vibrant live-performances. And with “Living The Dream”, they’re absolutely on top with the studio recordings as well.

Opening “Grazed By Heaven” is an up-tempo track with a catchy vocal line but still a lot of melancholy. Those moody melodies make URIAH HEEP sound the best. Of course, the fantastic dynamics this band has in the music does the trick too. But it sure works with the massive atmospheric sound in the title track “Living The Dream” too. The grand choirs work especially well towards the moody riff and vocal line in the verse. The first trio of songs closes with “Take Away My Soul”, another fantastic one that mixes the elements from the first two. And this far into the album, at the first spin already I was convinced that URIAH HEEP have released album of the year.

The album continues in the same fine way with “Knocking At My Door”, “Rocks In The Road” and “Waters Flowin’”. Even if these three are also fantastic songs, they didn’t strike as hard as the first three. Again, all holds fantastic melodies and I love the emotion in Bernie Shaw’s voice; you can really feel his energy and the joy he’s radiating while on stage. “Goodbye To Innocence” sets my mind to the URIAH HEEP sound of the early '70s. It has that “Look At Yourself” drive and roughness to it and the dynamic from “Demons And Wizards”. “Dreams Of Yesteryear” is another perfect example why URIAH HEEP should be included in the original four. Guitarist Mick Box’s unmistakable tone in the intro cuts through the speakers and sends shivers down my spine with that initial solo. The mellow passages before the song catch up in intensity are just fantastic. And the rather odd guitar-part that initiates the next verse makes it all unique. And it sure makes an epic ending of “Living The Dream”. A performance like this one is the reason why live-music is the best, and URIAH HEEP manage to capture the same feel, dynamics and nerve on record as well.

So, this is one fantastic record, vibrant and dedicated and it’s clear they’re still having fun together and it is as close to perfection as it possibly can be. It sounds fantastic, the musical performance is flawless and “Living The Dream” holds a fantastic bunch of song. So, what’s missing? It’s a little too short perhaps?