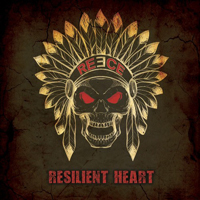 It doesn't take many seconds to realize you're in for a good ride giving “Resilient Heart” a spin. Opening track as well as first single “Any Time At All” is a modern sounding, melodic Heavy Metal track. And that's the key here; the album has a modern production, crisp, clear and full but musically, it is still about traditional style of Heavy music. Or, the REECE songs are, as much as they are right in between modern and classic, they hold that refined mellow touch from A.O.R without losing the Heavy Metal feel and beat.

“Wicked City Blues”, which follows, has a sticky chorus, and even though it is of mellow nature, the drive is fantastic. “Karma” is heavier and more laid-back and is built up on a dark and moody riff. I'm always thrilled about a song where the chorus is taken down to half-tempo which is done here and topped with David Reece's phenomenal voice and great sense of melody it never gets dull despite the Grunge-y feel. David himself is probably best known in the world of Heavy Metal for his stint in ACCEPT, replacing Udo Dirkschneider. He though, has a lot more on his CV with many years in BANGALORE CHOIR, BONFIRE and SAINTED SINNERS to mention a few. Also, add the solo album “Compromise” from 2013. To compare “Resilient Heart” with its predecessor, the new one shows a better structure and consistency, and I prefer the latter as a whole, even if “Compromise” shows more of David's range as a vocalist.

The smooth flow between Heavy riffs and melodic passages is something special on “Resilient Heart”, everything fits together perfectly. “Two Coins” is a perfect sample of this with the chewy verse and the loose chorus line which makes this land on the top of the list of favorites from the record. Another favorite is “Ain't Got The Balls” with its MCAULEY SCHENKER GROUP-oozing structure. The beat and rhythm behind a guitar melody delicately flavored with another fantastic vocal line was the trademark sound of the grumpy guitarist in the late '80s and early '90s. REECE delivers the same with perfection which makes relevant to comment on the musicianship in general on the album. There are fines and nerve which makes it intense, even though it is a very melodic album. It has that kind of live-vibe most modern productions lack. And that's another thing that makes “Resilient Heart” stand out.

It's actually hard to not include all songs in the list of favorites, the record is consistent high quality and the contrast between the ballad “Forest Through The Trees” and up-tempo “Perfect Apocalypse” just builds on to that. I think this album is a full on hit and that it doesn't really fit under any standard label is what makes it unique.