Heir Apparent - The View From Below 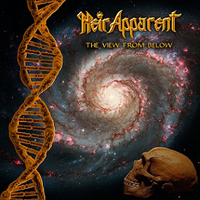 Wooah! The easy and mellow beat strikes immediately. It's a slow moving groove that kicks off HEIR APPARENT's new “The View From Below” and it is right in the middle of the smooth sound of “One Small Voice” and the raw unpolished feel from “Graceful Inheritance”. It couldn't be more right? Well, opening track “Man In The Sky” is a monster of a song and raises things further. It constantly increases in intensity and the crescendo coming with the encore of the last chorus is phenomenal. The desperation in Will Shaw's voice makes the hair in my neck stand straight up. His voice is very crisp and clean, almost boyish which make it all very unique.

“Here We Aren’t” is oozing contemporary FATES WARNING. Based on melancholy, dynamics and melody it breaks off the gnawing groove from the initial two tracks of “The View From Below” the ballad-y pace allows everyone to shine and I love the mix of clean melodies and a few filthy notes on the guitar solo. This small thing makes the music vibrant and genuine. This sets HEIR APPARENT apart from many other bands, the record has very nice organic production which on occasion feels barren and leaves very little space for flaws. But as the band's precision and musical performance is flawless the naked and honest sound just makes it better. Up-tempo “Savior” is another favorite track from the album; the drive is haunting and the way the vocal line is fed builds on to the feeling. It's a very short and snappy track; I don't think I've ever seen a song less than three minutes on Prog Power Metal record unless it's an intermission or instrumental part.

The last part of “The View From Below” is Progressive Metal at its finest clocking around 6-7minutes each. Even though the tempo is fairly the same in all they are very different. It is as how “Man In The Sky” build up the record initially these three move from very mellow in “Further And Farther” and increases in intensity, with “Road To Palestine” to come to the great ending with “Insomnia”. I really love the unique vocal lines and the melody in the bridge before the chorus is phenomenal. HEIR APPARENT have these small oddities in a few songs, like “Just Imagine” from “One Small Voice” for example. And those things are what set the band apart from so many others.

The band's first official release since 1989 (not counting “Triad” or “Foundations” since both are compilations) is an impressive piece of music. It's creative, filled with nerve and fines neatly packed together to one hell of a release.