Manticora - To Kill To Live To Kill 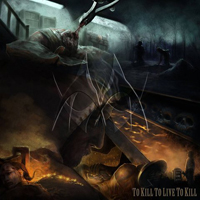 The dark and haunting chords that open “Echoes Of A Silent Scream” set a creepy mood right away. This one is definitely both darker and more brutal than MANTICORA normally are. But at the same time, there are a lot of fine details to the music on “To Kill To Live To Kill”. How emotions are captured to portrait the story... Yes, there is a very dark and uncanny concept backing it all up, written by Lars F. Larsen and published as a well-worth reading novel.

It was definitely beneficial to read the book in parallel to digging into the album. This made it even more fascinating how MANTICORA managed to deliver the same feelings through their music as described in the book. The different parts and passages in the songs as well as the record as a whole fit the stories... (just read the book) Musically, it’s perfection too; the distinct riffs at a furious speed are nailed to perfection. It’s raw yet melodic, dark and fateful and flows so smoothly.

“Through The Eyes Of The Killer: Towering Over You” touches upon NEVERMORE-styled semi-ballads in the likes of “Evolution 169”. Lars’ vocal performance is phenomenal straight though the album but particularly in this song it stands out. Few can deliver emotion like Warrel Dane could, but I’ll be damned if Lars doesn’t match that here. It’s devout, intense and melodic, all at the same time. I love it when parts and passages are taken down to mid-tempo and songs like that always appeal to me but this one still stands out with fantastic melodies and musicianship. “To Kill To Live to Kill” continues in the same fine way with “Katana: Awakening The Lunacy”; again the story from the book is perfectly translated with the music. At first though, this track felt a little messy, there are a lot of different parts and the changes from extreme brutality to refined melancholy are many. But once it had settled, it came out as one of my favourite tracks from the album. I love the vocal slide in the beginning of the chorus line.

Also, “The Farmer's Tale (Part 1: The Aftermath Of Indifference)” delivers some mighty fine dynamics and melodies. The almost complete stop and very mellow part before the stunning chorus does the trick. Progressive Metal doesn’t get much better than this. Also, part 2 of the story, “The Farmer’s Tale (Part 2: Annihilation At The Graves)” which also ends “To Kill To Live to Kill” is another fine moment. This however, sounds more like the classic MANTICORA compared to the rest of the album. I mean, my introduction to MANTICORA happened with “Hyperion” when this century was new and they’ve held a consistent high standard throughout the years. The epic side is definitely pushed harder on this new album, while this last track is more straightforward when compared to the rest. It’s absolutely nothing wrong with that. “To Kill To Live to Kill” is a massive piece of music, it’s extremely well-written and really everything hits head on. The whole package is an impressive piece of work; it’s complex, varied but still very accessible. Ok, it takes more than a few spins to really get it but it is worth the effort doing so.

One thing though, sometimes the frequency for the guitars and double kick-drum clash which makes the guitars less prominent. It’s unfortunate because on these (very) few occasion the power gets lost and it all becomes a massive wall of sound rather than distinct smack in the face the rest of the album is.

That’s just a petty little detail, musically this will be a hard one to beat, One thing is sure though, I’m looking forward to part 2 already. I just hope it won’t take another 8 years for MANTICORA to get that one out.

01. Piano Concerto 1: B Flat Minor...
02. Echoes Of A Silent Scream
03. Through The Eyes Of The Killer: Towering Over You
04. Katana: Awakening The Lunacy
05. The Farmer's Tale (Part 1: The Aftermath Of Indifference)
06. The Devil In Lisbon
07. Growth
08. Humiliation Supreme
09. Nothing Lasts Forever”
10. Katana: Opium
11. Through The Eyes Of The Killer: Revival Of The Muse That Is Violence
12. The Farmer's Tale (Part 2: Annihilation At The Graves)