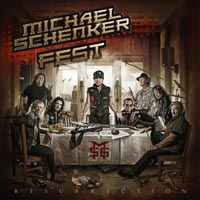 Another one of those albums I hardly dare to start listen to; Michael Schenker is one of my all-time guitar heroes as well as teenage idol. And with the awesome shows delivered under the MICHAEL SCHENKER FEST moniker, my anticipation was set extremely high for “Resurrection”.

On the other hand, teaser “Warrior” had eased up the pressure somehow. The mellow beat and fantastic melodies show off the band and vocalists from their best side. Voices mixed perfectly and just by watching the video, they seem to have fun together. The end of the second section of the first verse, where Robin McAuley hits that high note really sends shivers down my spine. What a voice! He (as well as the others) sound absolutely fantastic these days. But I wasn’t as sold on album opener “Heart And Soul” to start with; that one too has some good melodies and cool riffs but it feels kind of stiff. It does not hold the same dynamics and nerve as the rest. Sure, other songs on this record have double bass drum but have a much better groove to them.

“Take Me To The Church” works much better; here, it all fits perfectly together and again, the melodies stand out. That slight touch of melancholy really does the song good. Using harmonies like these is where Michael is at his best. “Night Moods” touches upon the “Assault Attack” era with the stiff beat. The fact that Graham Bonnet is singing this one is the main reason to point towards that direction of course but also musically it fits there. Else, it’s not like Robin’s, Doogie’s or Gary’s songs position themselves so much in their slot with Schenker. Ok, “The Girl With Stars In Her Eyes” could have been released on any of the TEMPLE OF ROCK albums but since those are more contemporary than the others it’s not that strange. Doogie sounds amazing as usual and this is a very pleasant song.

Then again, “Messing Around” and “Living A Life Worth Living” can be compared to the SCHENKER / BARDEN release. In the latter, the mellow beat sets my mind to fantastic songs as “A Night To Remember” or “Cross Of Crosses”. When Gary delivers like this, he is fantastic. This is definitely one of my favorites from “Resurrection”. I still think the most anticipated with the MICHAEL SCHENKER FEST album was the return of Robin McAuley to the fold. Apart from the opener, he’s also featured in “Time Knows When It’s Time”, another up-tempo track and this is really spot-on compared to the first one out. Here the dynamic and nerve are present which were lacking in the first. The emotion in Doogie’s voice for “Anchors Away” puts that one on top as well. The riff in the verse and I love that clean guitar. Together with the phrasing of the vocal line, it all becomes phenomenal. And that it has a very catchy chorus-line, which should work perfect live, makes it even better.

The finale, “The Last Supper” is another joint venture with all vocalists; easy-going, classic Hard Rock. The verses and the bridge though are stronger than the chorus. Even if it is a good melody, it becomes too complex and never really lifts. But I love the changes in intensity and tempo, so overall this too is a good song.

And it goes for the whole “Resurrection” album, it mainly is a very good album but my expectations had been higher. Michael is in top shape which is good to hear, but it was inevitable that I would feel like I did. The things that are good are really fantastic but there is a few songs that aren’t really sticking. But I know, if I (can) leave it for a while, all will come around, sooner or later.