Cellar Darling - This Is The Sound 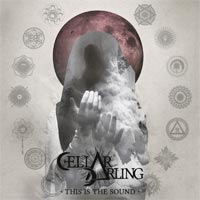 With every ELUVEITIE touring cycle, Anna Murphy kept growing as a performer and especially her vocals have flourished throughout these years. It would have been such a shame not to form something on her own and continue her journey so the silver lining in her, Merlin’s and Ivo’s split with the Swiss band was the birth of CELLAR DARLING. Of course, I have no inside info about the hows and whys of this parting, and really, it doesn't matter as long as new music is getting out. I am not being cold about it, but I am fully aware that being on the outside means not knowing all the details. However, the purpose of these lines is talking about music and “This Is The Sound” in particular, so let’s get on with it, shall we?

“Avalanche” opens the album with an almost intro-like structure (it sounds like the type of songs the band spins before starting a show) and sets the stage of what’s in store; the characteristic Hurdy-Gurdy sounds with Anna’s melodic and powerful vocals stand between modern and Folk Metal. Don’t be scared by the term 'modern', but do not be lured by the term 'Folk' either. CELLAR DARLING are not trying to be ELUVEITIE but sound like carving their own musical path, bringing different elements in the process. In “Black Moon”, Anna reminds me of Anneke van Giersbergen and I think the music also helps to make such a connection. This is a mid-tempo song built around the vocal melodies with the Hurdy-Gurdy appearing just before the guitar solo, showcasing that CELLAR DARLING have some solid Metal foundations. The Folk elements take a step forward with the (still) mid-tempo “Challenge” as Hurdy-Gurdy stays longer on the spotlight, while the combination of violin and guitar riffs brought forth a late SKYCLAD taste. “Six Days” pushes the scales towards a heavier sound having the guitars higher on the mix although the tempo is still mid-ranged. The piano-sounding keyboards and the low-registered almost narration-type singing bring a dramatic tone on this song in a THE GATHERING way which sounds awesome.

The guitars lead the way in “The Hermit” and “Fire Wind & Earth” before stepping back a bit in the mix living more to wish for and this is only complaint I am willing to make. After all, during the second part of the latter song, it is full on with the higher bpms and the headbanging guitar / Hurdy-Gurdy combination of we learned to love with ELUVEITIE. If I am not gravely mistaken, the lyrics in “Hedonia” are in Swiss, so you’ll get a hearty Folk fix (all those consonants with that pronunciation do so well with Metal) and then, you’ll definitely enjoy the combination of guitar riffs and Anna’s high to low pitched vocalisms.

This is a moody album with powerful melodies (especially vocal ones) but not as heavy as you might be expecting (although one should approach music being as unbiased as it is humanly possible). You will need a couple spins more than usual to get all the flavors, but you will be rewarded in the end. It is also helpful to keep in mind that no matter the musicians’ background, this is still a debut LP, so expect to see (and hear) CELLAR DARLING refining their sound along the way. Still, these thirteen tracks are more than enough to convince you that good things are still to come.

Eluveitie @ House Of Blues, Chicago (US)

Eluveitie @ House Of Blues, Chicago (US)