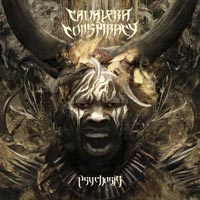 Whoever had the chance to attend the ‘Roots’ tour with the Cavaleras playing the entire SEPULTURA namesake record witnessed the great state the brothers are in, so seeing a new CAVALERA CONSPIRACY LP hitting the stores should not be a surprise. So, the (obvious) questions dying for an answer are; how has the “Roots” revival affected the music-writing hands, and how “Psychosis” sounds like? Does it follow as straight line from “Pandemonium”?

The best answer to the above questions and most probably to the rest ones swimming inside your Metal brain is the killer guitar groove opening the album with the fast “Insane”. You can definitely identify, Iggor’s solid drumming with his characteristic rolls backed up by the natural-sounding production. Yeah, the hi-hat will wake some '90s Thrash memories and yes, I am referring to the “Arise” era. The amazing thing with whatever Max is doing is his ability to making it sound different and at the same time characteristic of his unique tribal-meets-Thrash mix. On top of everything, there is Max’s unique way of singing making every word sound totally pissed off with a still-going Punk in-your-face twist. “Terror Tactics” uses this profile and this should not be a socking surprise if you pay closer attention to what the lyrics saying. Although to do this you have to first stop headbanging, especially during that solid and groovy break with those strange-vocalizations in the background. And then, there is another break with some tribal-percussion building the perfect rhythm section for Rizzo’s solo before letting Max go back to the vocal-chords torturing... In fewer words? Just awesome!

Amidst the Thrash mayhem there is “Crom” starting off with some post-apocalyptic eerie sounds before letting the guitars making things a bit more bizarre (with some Eastern melodies perhaps). Fear not, Thrash is on its way and it explodes through Iggor’s pounding drumming and Rizzo’s early SLAYER-inspired soloing (that sweet tremolo action). And don’t forget the double-bass drumming with such a full sound that I would advise you to listen with your headphones on...

Every album with Max behind the mic is full of anger and despair and “Psychosis” will not change this. However, the black almost nightmarish atmosphere it possesses is what separates this LP with what he has done. Maybe, SOULFLY’s “Dark Ages” is the closest one in terms of the overwhelming blackness because brutal-wise, “Psychosis” is a click more powerful. Just notice how the almost Industrial ending of “Hellfire” bleeds into the insane “Judas Pariah” and you’ll definitely see my point. This is borderline Black Metal and may open the “Morbid Visions” / “Schizophrenia” door (but with a way better production... hehe). Hold on though, this song is not all about snare-drum massacre because during the spoken-lyrics part you’ll get some new flavors with an Eastern twist through an post-apocalyptic looking glass (again).

In case your “Roots” hunger has not been satisfied, then make sure to crank the volume up during the amazing album title track and enjoy the new source of inspiration the brothers are drinking from. Or maybe this is Iggor’s other musical ventures and instincts kicking in... In any case, the result is absolutely fantastic.

I am extremely excited to realize that the Cavaleras tapped into the energy they showed they had when they were onstage and have created a solid piece of Thrash which is already the best CAVALERA CONSPIRACY album of the four. Without losing all the characteristics of an album with the Cavalera name involved, “Psychosis” has some really interesting ideas that do really well with the Thrash background of the two gentlemen. It’s like they have both completed their musical journeys and have returned in full circle to create something new. As Max is often saying when he is onstage: “Bring this shit!”

PS: The “Arise” cameo during the spoken part of “Excruciating” with the under the pale grey skies will give you goosebumps all over your body! F*****g awesome! Is it hard to guess what or who is this two-headed Brazilian Godzilla herein being described?