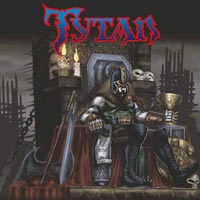 During the first few spins of “Justice: Served!”, I wasn't thinking it sounded anything at all like TYTAN used to back in the day. And by all means, it's only bass player Kevin “Skids” Riddles left from the old days, so it's no wonder it all sounds kind of different. Getting into the record and also giving “Rough Justice” a go, I realized this sounds exactly like TYTAN... Or, what I realized is that the type of songs on both “Justice: Served!” and the old record varies in style; from simple Hard Rock to Heavy Metal and to some really Epic stuff. Despite the variety either of them appears as disrupted or, as many new bands that can't select one style, confusing. So, in that sense, it sounds like TYTAN nowadays too, but it's definitely and upgrade in dynamics and nerve.

This is really full on from start; “Love You To Death” is a good and catchy tune with a great sing-along chorus. A song that definitely should be a live-favorite for the coming shows. The same can be said about “Fight The Fight” and “Spitfire” too. It's pretty much standard Hard Rock we're talking about but TYTAN certainly have something which is hard to pinpoint which make them to stand out. The songs are very well-written and the musical skills of the band members are phenomenal.

My absolute favorite from “Justice: Served!” is without a doubt “Reap The Whirlwind”; it's dark, gloomy and damn Heavy. Also, the tone in Tom Barna's voice here is absolutely fantastic. Looking back, I realized that “The Watcher” is one favorite from “Rough Justice” which also is an epic track and that's where it all started. There's also “Forever Gone” that could be put in parallel with “Far Cry”, “Hells Breath” towards “Blind Men And Fools”, “The Cradle” to “Rude Awakening”. No, I'm not saying TYTAN have ripped off themselves; it's more that the songs have the same feel, structure or other details in common. It's variation within the TYTAN frame.

“Midnight Sun” came as a bit of a surprise, it's not often bands record ballads these days and it is more rare that they're acoustic (clean sound only). Anyways, again Tom really impresses with his vocal capacity and feeling. The second half of “Justice: Served!” leans more towards Heavy Metal, which definitely works for me. Both “Forever Gone” and the instrumental “Billy Who” have such a nice drive and flow to them. Also, it's really impressive to create an instrumental track that still feels like a hit-song and is interesting the full three minutes worth of music. I don't really understand “Worthy Of Honour” and it really stands out in style compared to the rest of the album. It feels like something an arena band would have done during the '90s, first half acoustic but more of a singer-songwriter style and the second half is an epic guitar solo. There's no complaining about the performance but it feels like the odd track of the album. GUNS 'N' ROSES’ “November Rain” comes to mind.

“Justice: Served!” is wrapped up with another epic; “The Cradle” where again TYTAN show their talent in creating interesting and very catchy songs. The vocal line feels light while the riff behind it is lead-heavy and it sounds fantastic. The fun thing is that I didn't even realize that this last track too had a long instrumental second section; of course the passages from the first half come back and wrap it up. But this shows the geniality and fines TYTAN possesses when the instrumental parts is as interesting as the songs themselves.